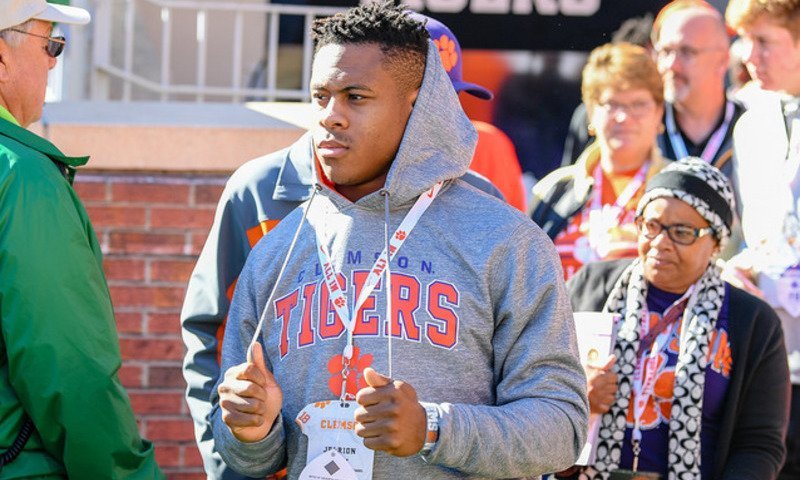 Ealy is shown here on the sidelines Saturday at Clemson

No. 2 Clemson rushed for 492 yards and had three backs go over the 100-yard mark in Saturday’s 77-16 demolition of Louisville.

Not a bad way to impress one of the top running backs in the 2019 recruiting cycle, a back that also happens to be committed to Ole Miss.

Jerrion Ealy is a 4-star prospect out of Jackson (MS) Jackson Prep who committed to Ole Miss last December. Ealy (5-9, 195), ranked No. 108 nationally by Rivals, committed to the Rebels to play both football and baseball.

However, the Clemson coaching staff has been looking for a second back for the 2019 cycle and targeted Ealy early in the procefirst-roundid the Clemson visit allowed him to spend time with both the baseball and football head coaches.

"I love the coaching staff, I feel like they are a genuine group of guys and are just an amazing coaching staff," Ealy said. "I had a conversation with Coach Swinney and (baseball) Coach Lee and I talked to a few of the other guys."

Ealy also is projected as a first round draft pick as an outfielder for next summer's baseball draft and Lee told him he has a spot on the baseball team if he decides to come to Clemson.

Ealy said he kept a close eye on the running backs during Saturday's game because he wanted to evaluate how position coach Tony Elliott handles his guys.

Ealy was on campus for the spring game and plans to take an official visit to campus later this year.

“I'm not looking to make a decision anytime soon. I'm signing in February," he said. "I'll take my official visit there and a few other visits and hopefully I'll get my answer then."

He also plans to take officials with Alabama, Ole Miss, Mississippi State and either Southern Cal or Tennessee.

"It's strong," Ealy said of his Ole Miss commitment, "but my decision can change for the right reasons." He plans to return to Oxford for a visit for the Egg Bowl later this month. His father and step-mom joined him on his visit to Clemson.

According to stats compiled by MaxPreps, Ealy has rushed for over 4000 yards and has averaged nearly 10 yards per rush in his career. He's scored 73 touchdowns.