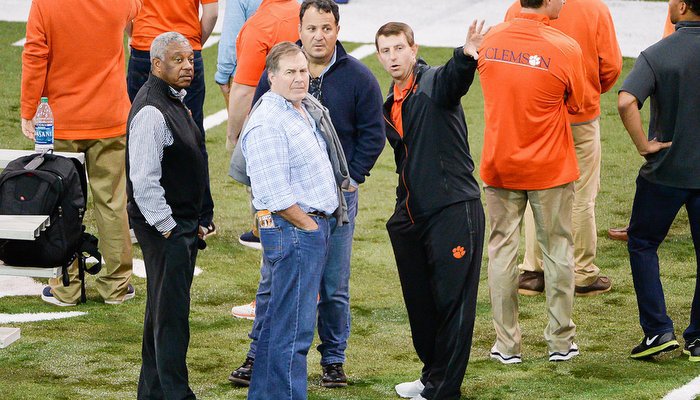 Bill Belichick was on hand to check out Clemson's talent Thursday

CLEMSON – Thursday was a day for Clemson to show off its indoor practice facility and ability to turn out NFL-caliber players as head coaches, general managers and scouts from all the NFL teams gathered to watch Clemson’s draft-eligible players work out. Some players showed out more than others.

Belichick watched Williams’ foot drills with interest, dropping to one knee to watch Williams, and Williams said he hopes he made an impression.

“I think it was a good day for me, a guy coming out of the shadows,” Williams told TigerNet. “I didn’t get talked about too much this season, but I think I’ve shown what I can do and I think I kind of separated myself. There are a lot of teams showing me some love, and I hope that performance today increased that.”

“Yeah, I saw him give me a look during the foot drills,” Williams said with a smile. “He was like, ‘Who is this guy?’ But I got his attention, and that is a good thing. But whoever picks me is going to get a hard-working guy. I am not a guy that will be showboating but I will get the job done.”

Dabo Swinney
Head Coach
View Full Profile said the amount of NFL scouts and execs on hand shows the respect the Clemson program gets from the league, but he said he also knows why the scouts showed up in droves.

“That’s why right there, six D-linemen standing there,” Swinney said he told Philadelphia head coach Chip Kelly. “You know where they’ve come from and how they’ve matured and developed into what they were this past year. We’re really happy for them. They all look great and they’re all going to get an opportunity.”

Clemson’s former players got the chance to showcase their abilities in front of 69 scouts from all 32 NFL teams. Three pro coaches — Kelly, New England’s Bill Belichick and Buffalo’s Rex Ryan — as well as three general managers and three CFL scouts made up the largest group to ever attend a Clemson Pro Day.

DeShawn Williams of Clemson hitting the bags WOW from a scout http://t.co/ejtDQZyA3I

“I feel like I did some good things,” Anthony said. “There’s always room for improvement. I’m gonna always be hard on myself but definitely was prepared for today and I think I did a good job and the rest my guys did too.”