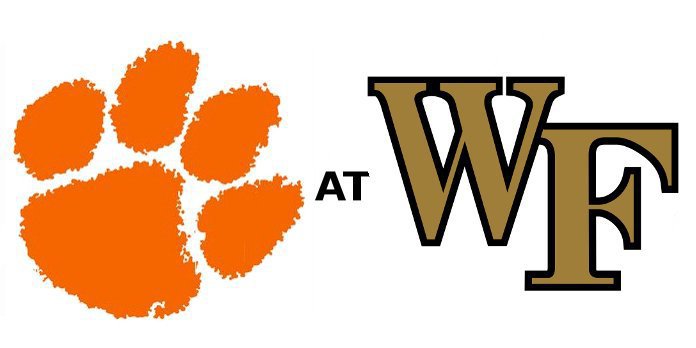 It’s simple if you’re Clemson. There are no ifs or ands and hoping someone else wins or loses. Saturday night is win or else.

Win and the Tigers claim a second consecutive ACC Atlantic Division crown, nail down a berth in the ACC Championship Game and keep their hopes for a spot in the College Football Playoff alive. Lose, and Louisville wins the crown and Clemson can look forward to some other bowl trip, the kind that wouldn’t be much of a consolation prize in a season that started with high expectations.

Clemson is heavily favored over the Demon Deacons, but all you have to do is take a look at the Tigers’ loss to Pitt last weekend, Michigan’s loss to Iowa or even Louisville’s Thursday night loss to Houston to know that upsets have dotted the college football landscape the last few weeks.

There is one statistical oddity that only Clemson fans will appreciate – the Tigers own the all-time series against Wake with a mark of 63-17-1. When you get into November, 63-17 is always a good thing.

This is the part of the prediction where you say, ‘Wow, we’ve heard this all before.’ Clemson can move the football and score on anybody in the country. Some of Clemson’s offensive numbers have been gaudy this season, including piling up over 600 yards of offense and throwing for 580 yards last week against Pitt. But, the Tigers turned it over three more times last week, including two in the red zone, and failed to run the football with efficiency. The Tigers failed to get a yard on a late third down and fourth down, a failure that set up Pitt’s game-winning field goal. Clemson is now 93rd nationally in red zone conversions, scoring on 41 of 51 trips inside the 20. Just 32 of those have been touchdowns.

I won’t go into any great detail about the scheme or opposing players in this one, because it’s simple: protect the football and establish a bit of a running game and the Tigers can win without having to hold on at the last second. ADVANTAGE: CLEMSON

Junior tight end Cam Serigne has to be a concern for Brent Venables, especially after the Tigers struggled (and that’s being kind) with Pitt’s tight ends a week ago. Over the past three seasons, Serigne has caught 120 passes (54 in ‘14, 46 in ‘15, 20 in ‘16). Serigne is second nationally among tight ends with 120 career catches, and the Deacs like to use play-action to get the ball out to Serigne in the middle of the field.

This is a good week for Clemson’s defense to get some of the swagger back that it lost against Pitt last week. The Deacs watched that game tape, and they’ll use some late shifts and weird formations and Clemson will probably see the shovel pass. Will it be enough? Probably not. ADVANTAGE CLEMSON

Punter Dom Maggio has 14 punts of 50 or more yards this season and his 21 punts inside the opponents’ 20 is the fifth-most in school history. Field goal kicker Mike Weaver has 17 field goals this season, which is tied for tops in the ACC. Clemson kicker Greg Huegel has 16 field goals on the season, while Clemson’s punting still sits a tad below average. Neither team scares you on kickoff or punt return. Wake has the edge because of a better punter. ADVANTAGE: WAKE FOREST

Did the Pitt game show Clemson has vulnerabilities on defense? Yes. Did it show the Tigers are still not a polished product offensively? Yes. Wake is playing really well on defense this season, and they held Florida St. in check for four quarters and Louisville in check for three quarters. But unlike Pitt and some other teams that have kept it close against the Tigers this season, they aren’t dynamic enough offensively. This one will be a typical Clemson game at Wake – too close for comfort for a while, but the Tigers pull away in the end.

Nation's No. 1 DT has Tigers in top-4
Post your comments!