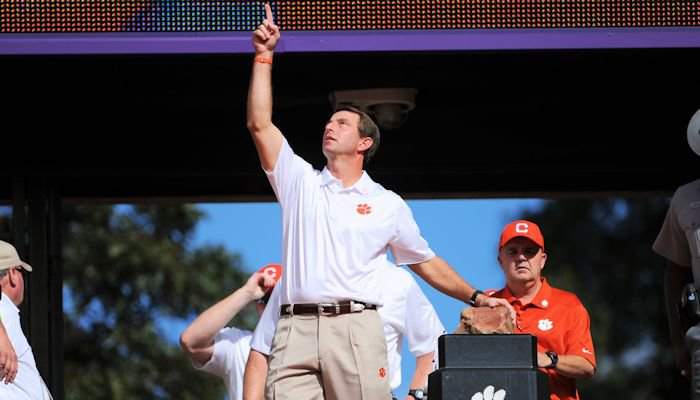 Clemson University has sent an official response to the Freedom From Religion Foundation, a response that states the foundation “misconstrued” facts when outlining a complaint against the school last month.

An attorney for the foundation said Thursday that while legal action against the school isn’t out of the question, he admitted that “litigation is certainly disfavored.”

The school's senior associate counsel - Erin Swann Lauderdale- sent a letter dated April 24 in reply to the FFRF's complaint. A copy of that letter was obtained by TigerNet.

In the letter, Lauderdale responds to  FFRF staff attorney Patrick Elliott, and she states that the university and the football staff are in full compliance with the United States Constitution.

I am in receipt of your letter dated April 10, 2014, regarding the Clemson University football program. As you know, I have been out of the office on vacation. Based on my initial review of your letter, however, it is clear that you have misconstrued important facts and made incorrect statements of the law.

Nevertheless, it is our practice to continuously review Clemson’s programs, including those which provide for the development and wellbeing of students, to ensure compliance with Constitutional requirements. We will include your claims in our review.

Last month, the university released a statement that a review of the football program and its practices are in compliance. Clemson tells FFRF it 'misconstrued' facts in complaint

We believe the practices of the football staff regarding religion are compliant with the Constitution and appropriately accommodate differing religious views. Participation in religious activities is purely voluntary, and there are no repercussions for students who decline to do so. We are not aware of any complaints from current or former student-athletes about feeling pressured or forced to participate in religious activities.

Clemson takes very seriously its obligation to provide a comprehensive program for the development and welfare of our student-athletes ­ which encompasses academic, athletic and personal support, including support for their spiritual needs.

We will evaluate the complaints raised in the letter and will respond directly to the organization, but we believe FFRF is mistaken in its assessment. The Supreme Court has expressly upheld the right of public bodies to employ chaplains and has noted that the use of prayer is not in conflict with the principles of disestablishment and religious freedom.

In a return email to Lauderdale dated April 29, Elliott responded, “FFRF is committed to accuracy, and we would be pleased to gain a full understanding of the facts. Can you please inform the FFRF of any facts that you feel have been misconstrued?”

During a phone interview with FoxCarolina’s Aaron Cheslock earlier Thursday (the audio was obtained by TigerNet), Elliott said he believed the response was inadequate.

“There have obviously been a lot of words spilled over this issue, but not by the university,” Elliott said. “We wrote an extensive complaint based on public records we had received and the response we got was five sentences. I really think it was inadequate and doesn’t adequately address the issues we raised at all. When the university said that we misconstrued facts, that doesn’t explain what those facts are or what facts they are talking about. It really seems like they don’t want to address the issues at all.

“It’s not surprising that the university’s legal counsel – whose job it is to defend the university – would defend what the university is doing. So it’s not a surprising response in that respect. The line that a lot of the coaching staff seemed to have been touting was that activities are always voluntary. Which, from an establishment clause perspective, isn’t the ultimate question. Even if athletes have the chance to opt in or out of religious activities, it’s still a state university that is promoting religion and that’s a problem.”

However, Elliott said he didn’t believe litigation would be pursued, and that the foundation would depend on further reports from supporters in the area regarding the activities surrounding the football program.

“We want to see how this program goes forward. I hope we can have some further dialogue with the university’s legal counsel or the university about this,” he said. “Litigation is certainly disfavored and we would prefer that’s not a part of this. So I don’t really know what the ultimate end result would be. We would hope that they will seriously consider these issues and change what their coaches have been doing.

“We may have to monitor it through our members who follow Clemson football. We may well hear from people about the program and if it has changed. We also may hear from the university and how the scheduling of religious events will be changing.”