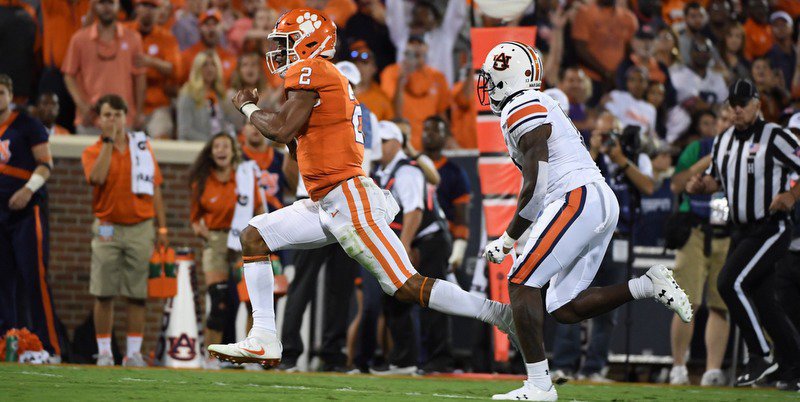 Kelly Bryant races for the endzone against Auburn

CLEMSON – Jeff Scott knows that if Clemson is to end the weekend with a win over Louisville, the offense will have to play better than it did in last Saturday’s victory over Auburn.

The offense managed just 284 total yards despite converting on nine of 16 third down opportunities. The Tigers threw for 184 yards but averaged just 2.8 yards per carry in gaining 99 yards on 36 attempts.

Clemson also turned the ball over twice, once at their own ten.

“There’s still plenty to coach, I think the biggest negatives would be the two turnovers. If you turn over the ball against a team like that in those kinds of games you can get beat,” Scott said Monday. “That’s something that we harp on and something we need to do, and hopefully our guys will learn from that. We also got Kelly (Bryant) hit a little bit more than we wanted to. You have to give them credit. They have a very talented defensive front, those ends were very active and they’ll make a bunch of plays this year.”

However, Clemson can’t use Auburn’s defensive talent as an excuse.

“Our guys go against talented ends every day in practice, we’ve done better and we can do better, we’ll get that cleaned up,” he said. “We didn’t quite have the rhythm that we wanted, some of it was what they were doing and some of it was a lack of communication where we weren’t on the same page. Particularly on that first third down, when you don’t convert on third down it hurts your tempo and it hurts your number of plays overall. So, there are definitely some things that we can clean up and learn from this one.

“But overall, it was the first time a lot of those guys were in that situation, you can practice it but there’s really no substitute for experience. So that’s something that we’ll be able to grow from and use a little down the road for some confidence if we get put in a similar situation.”

Kelly Bryant races for the endzone against Auburn "

While Auburn is still trying to find any kind of groove offensively with new quarterback Jarrett Stidham, Louisville knows exactly what it’s doing with electric quarterback Lamar Jackson, who can put up points in a hurry. However, Scott said the Clemson coaches and players can’t put pressure on themselves thinking about a certain number of points.

“It’s really not something we talk a whole lot about. Really our goal is to go out and score as many points as we can, but I think offensively as coaches, as we’re game planning for things we know the temperature of the game and what we’re playing against,” he said. “There’s no doubt Louisville has an explosive offense and last year was a display of two explosive offenses going back and forth. This year we have a really good defense and they have a really good defense, so again its going to be another big challenge.

“But I think for our guys, our message doesn’t change. It’s about us and even though Auburn is really talented and did some really good things on their side, we can go back into these meetings this afternoon and figure out why the drive stopped. So, our message this week will be the same - we’re going up to play in a very difficult environment against a very talented defense. But at the end of the day, it’s about us and what we do and how we execute. If we focus on us and protect the ball, we feel that we have a good shot in every game that we play.”

Clemson will rely on an old standby this week in practice – piping in crowd noise to prepare for a road night game.

“I think the standard stuff we do we’ll be plenty to get them ready,” Scott said. “We’re going to pump plenty of noise into the practice facility and work on our verbal communication. I think the biggest thing for our guys is just being sure that we’re all on the same page. We’ll get some music in here and focus on our execution.”

I asked Scott about the running back rotation – specifically asking if it would be better to get one running back most of the reps – and he said the competition was still too close to call. 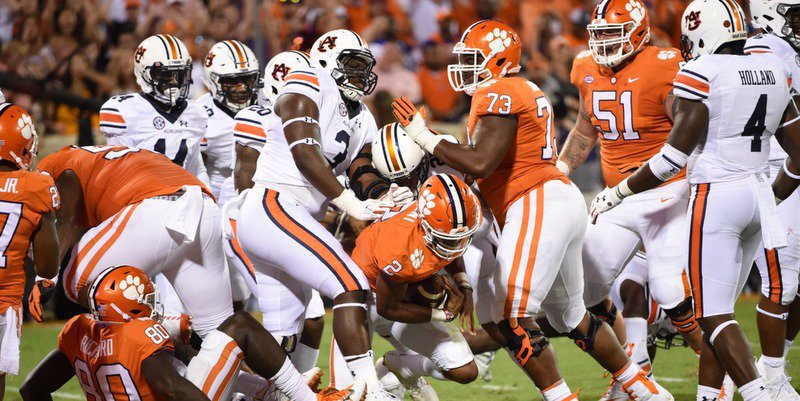 Clemsons offensive line will have to block better next weekend

“I think those guys are so close, there isn’t one guy that’s in front of the other, maybe that will happen as the season goes,” Scott said. “But right now, it’s a very close competition between those three and Travis is a guy who’s going to get more opportunities as the season goes. Against Auburn in a one possession game, it’s a tough spot to put a true freshman out there. Especially considering the types of blitz packages and looks the Auburn defense was giving us. We have confidence in all four guys and they’re all going to have their moments. Whoever gets the hot hand will be the guy that we’ll lean on but for right now the competition close enough where we can pick just one guy to be out there.”

Tremayne Anchrum got the first two starts of the season at right tackle, but the competition with Sean Pollard is still wide open.

“Yes, absolutely. We came out of fall camp and it was close enough where we're going to let those guys compete on the field,” Scott said. “There were some mistakes made by both of them Saturday night but they also did some good things. The offense line is kind of like the long snapper on the field goal or punt team, you only notice him when they make mistakes. Sometimes a receiver will run a wrong route on the back side and the only one who notices it is me. But those guys up front if they make a mistake everyone sees it. But I think those two guys have a lot of pride and potential, and I know coach Caldwell is going to work with them all week and get those mistakes corrected.”