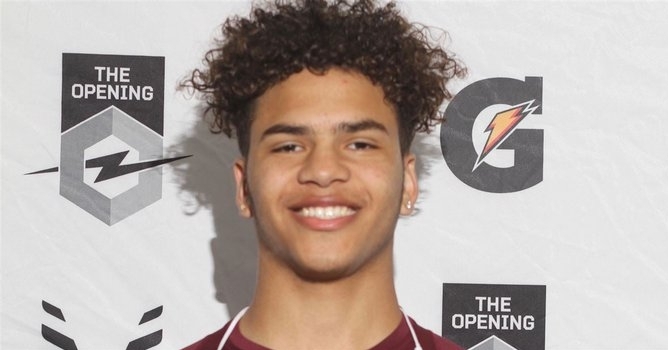 With plans to announce a commitment on May 5th, Lucas Coley was looking to decide where he would be playing college football. After discussing that decision with his family, Coley has now decided to push that commitment back and weigh all of his options. And after recently talking with the Clemson staff, one of those options could soon come in the form of a Clemson offer.

Coley (6-2, 205) is a dual-threat quarterback from Cornerstone Christian (TX) San Antonio, drawing offers from 30 schools around the country including Arkansas, Washington State, Houston, and UCF. The talented 2021 prospect is known for his strong arm and speed, also running track in high school. TigerNet spoke to Coley about his recruitment and what he’s been hearing from the Clemson coaches.

Clemson has offered just two quarterbacks for the 2021 recruiting cycle, but both 5-star Caleb Williams and 3-star Christian Veilleux have moved on. Veilleux recently committed to Penn State and Williams released a top three Monday that didn't include Clemson.

Coley has been in contact with Clemson’s Director of Recruiting Jordan Sorrells and quarterbacks coach Brandon Streeter. What has been the message from Sorrells and Coach Streeter?

“Coach Streeter asked me to push the (commitment) date back,” Coley said. “They said I stood out on film to them and they want to continue to recruit me heavily. We talked for an hour a few days ago. Coach Streeter said they only have one guy offered and they went back and looked at film and I really jumped out to them. Later this week we’re going to have a video chat and break down film and just go from there.”

After being close to deciding on a school, Coley has a good idea of what he is looking for in a school. What all will go into deciding the right school for Coley?

High school football in Texas has always been known to be the best of the best, and Coley embraces that challenge of competing against the best every week. Coley’s work ethic and mindset makes him a prime candidate to be a successful quarterback, leading his team on and off the field. What makes Coley a highly recruited player and what do coaches like about his game?

“A lot of people throw around the dual-threat tag and they like that about me,” he said. “A lot of coaches tell me I’m a pro-style guy who can run, and I can have the designed runs and enhance an offense in that way. I feel like I can bring that element to a team. I feel like my biggest impact on a team is off the field as far as leadership goes. Always being the first one there and the last one to leave, the hardest worker, always picking up my guys, knowing how to lead each guy and knowing what makes them respond. I bust my butt day in and day out, but I feel like what I do off the field is what makes me different from everybody else.”

What is it about Clemson that stands out to Coley? And what would a Clemson offer mean to the Texas QB?

“That’s championship territory,” he said. “That’s always the goal where ever you go, you want to go somewhere you can win championships. They produce players in the NFL each year and that’s my goal. Just to go where that’s the expectation and that’s the culture. Clemson is THE place to go and be developed as a quarterback. Kelly Bryant, Deshaun Watson, Trevor Lawrence and now DJ. That just speaks for itself. That would be huge for me as a quarterback. Just knowing that I could go play for a historic program and win some more championships, and that’s ultimately the goal.”

Coley has taken visits to the main schools that have been recruiting him, and the Clemson staff is wanting to get Coley on campus soon. With talks just beginning with Coley and Clemson, the duel-threat quarterback is excited to learn more about Clemson and the coaching staff.

“I want to know that me and Coach Streeter have a connection and that I can see myself being coached by him for the next 4-5 years,” Coley said. “I know that’s not how it always works out at the college level and coaches rotate in and out each year, but I want to go to a coach that I feel like can develop me and make me the best I can be so when the draft comes I can be prepared. Clemson told me they want me to come visit when everything opens up. If I’m not committed at that time and I have an opportunity to be a Clemson Tiger, then I will definitely make the trip up there.”

Coley took home the Rivals Camp Quarterback MVP award in February, impressing the coaches with his arm strength and accuracy. Coley makes plays in the pocket with his live arm and is also a threat running the zone-read. Rated as a 3-star by 247Sports, Coley is currently listed as the No. 19 dual-threat quarterback in the country and the No. 88 player in Texas.