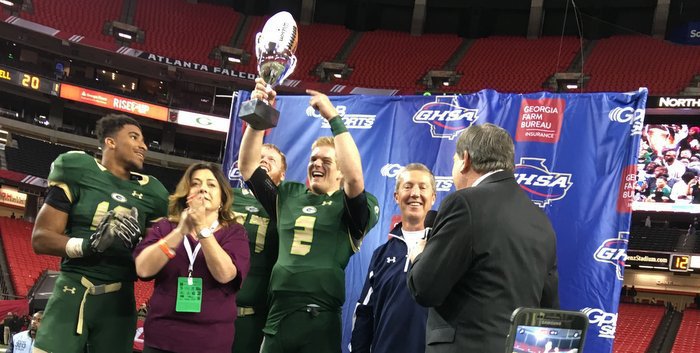 Brice, the 2017 Clemson quarterback commit out of Loganville (GA) Grayson engineered two crucial scoring drives in the fourth quarter Saturday — both on passes to Jaquavius Lane —as Grayson clinched its second state championship on a Will VanPamelen field goal in overtime in defeating state power Roswell at the Georgia Dome.

The Rams captured the first-ever Georgia Class 7A state championship, claiming their first state title since 2011 and also avenged last year's heartbreaking semifinal loss to Roswell with the win. Brice was 18 for 27 and 283 yards with three touchdown passes and a big two-point conversion pass. He ended the season with 33 touchdown passes and about 3,000 yards passing.

“It feels great to be a part of history like that in the state of Georgia,” Brice told TigerNet Sunday. “Especially to close out by winning the last game we get to play in the Dome before the new one is made. It's a very special feeling and I don't know how to describe it right now. It will probably hit me later.”

The Roswell run defense suffocated the Grayson rushing attack and the Rams had to change their game plan.

“Early on, their defensive line was getting to me quick. They were really fast and very physical but we stuck with the short game, Brice said. “We thought we would be able to take some home run shots, but since they were getting a lot of pressure we knew we would have to stick with the short game and let the receivers make the plays by breaking tackles and getting yardage. So we stuck with that and then occasionally they would bite and I would go over the top. We tried to run a balanced attack but running the ball was tough on that front seven so we did what we had to do to win.

“It was different because we had led every game since that IMG game. It was different but nobody flinched. Nobody was stressed and I just told them to stay confident and keep their heads up and we would go make plays. “

The game also featured a battle of Clemson commits and perhaps the Tigers’ remaining priority target in Roswell’s LeAnthony Williams and Xavier McKinney.

“During the game and in between series we would exchange words and say what's up or give each other a high five,” Brice said. “But after the game I went up to LeAnthony and X and told them they played a great game and it was one for the books, especially how it ended. It was two great teams going at it and I have a lot of respect for both of them.”

“They are tremendous athletes and outstanding defensive backs. They are tough to get around,” he said. “X can cover the whole field hash to hash. You have to make sure you throw that ball on a rope or it's going to get picked. He's a strong corner and plays that position really well. He's strategic about it and he watches film. You don't get many completions on him. They are both great defensive backs and I'm glad we got LeAnthony and hopefully we get X.”