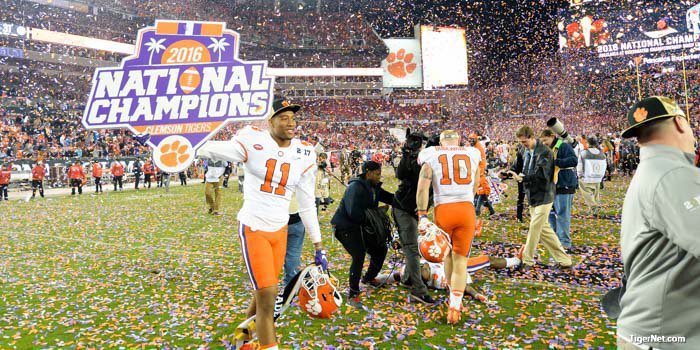 Clemson football came full circle in the Shirley household – and a lot of other households – Monday night.

My journey with Clemson football started in 1976 when I attended my first game with my dad. My first road game (at Georgia) came two years later, and there were many great memories from that first game until I graduated from Clemson in 1993.

We started with two tickets and then went to four – two in the home-side lower deck and two in the upper deck. When the new upper deck was built on the visitors’ side of the stadium, my dad moved the four tickets there, and we sat in the same spot for years (he moved those tickets down to the other end of the upper deck a few years after that).

In fact, from the time we started going to games until I graduated, I missed two home games – against Notre Dame in 1977 when my dad took a friend with him and against Wake Forest in 1979 when my dad was involved in a car wreck before the game and couldn’t go.

There were so many great games (all those close games with Georgia, facing the terrific Maryland and North Carolina teams in the early 1980s, the rivalry games with South Carolina and all the bowl wins) during that time.

The highlight of all those experiences, obviously, was the 1981 team that came out of nowhere to win the national championship. I can vividly remember sitting on my parents’ couch watching the win over Nebraska in the Orange Bowl and not believing what I just saw. Championship brings Clemson football full circle

I have been asked why Clemson football means so much to me, and the answer is easy: It was something I shared with my dad and still share with him. It’s something that just became part of our lives.

If it was Saturday and Clemson had a home game – most of them were at 1 p.m. back in the 1980s – we were going to be there. That sticks with you and becomes a part of you.

After I moved to Georgia (for my first job in Valdosta) in 1993 and started working as a sports writer, I would call home to talk to my parents, and typically the first topic with my dad was Clemson football, the good and the bad. And there was a lot of bad in the 1990s and early 2000s.

Those are the kinds of memories I’m now sharing with my sons, Ben and Matt.

We don’t get to go to as many games as I did growing up, getting up to Anderson/Clemson from Middle Georgia usually once per year during a season. Ben wasn’t even two months old when we went to Tallahassee for his first game, and he slept through the entire game despite sitting right next to the Florida State band. It was a good thing, too, because it was a Seminoles rout.

Since then, we have gone to many games with my sons (and my wife, Laura), and they have grown to become big Clemson fans. One of the big highlights was the first Clemson-Carolina game for Ben and Matt two years ago when Clemson snapped its five-game losing streak to the Gamecocks. We also were able to head up for this year’s Clemson-Carolina game, and that was another night we won’t soon forget.

Monday night brought about the ultimate highlight, sitting on the couch with Ben watching Clemson wrap up its second national title with Deshaun Watson’s game-winning touchdown pass to Hunter Renfrow. Seeing Ben’s reaction brought back a lot of memories and brought everything full circle back to 1981 and my reactions to that championship game.

And that made it even more special than it already was.