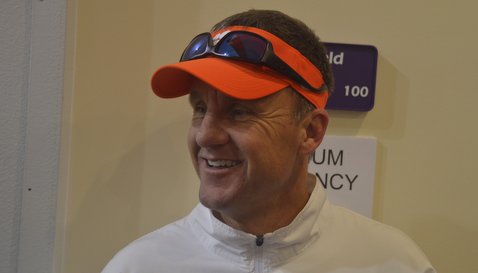 Meyer's Buckeyes have gone up-tempo at times this season

Clemson’s offensive coordinator told the media Monday evening that his relationship with the Buckeyes’ head coach goes all the way back to when Morris was coaching high school football in Texas and Meyer was at the helm of the Florida Gators.

The two coaches will square off – in a manner of speaking – in a few weeks when Clemson takes on Ohio St. in the 2014 Discover Orange Bowl.

Morris was coaching at Stephenville in Texas when he took his staff to Gainesville to learn more about Meyer’s system.

“Actually, when he first got there from Utah we took our staff down and spent four days with them and Coach (Dan) Mullen and his staff and learning some of the things they had done and taking those back with us. That is where our relationship kind of started,” Morris said after Monday’s practice.

The two coaches then took different paths – Meyer resigned at Florida and took a year off, while Morris went from Stephenville to Lake Travis to Tulsa before winding up at Clemson.

During Meyer’s hiatus from coaching during the 2011 season, he worked as a game analyst for ESPN, allowing him to reconnect with Morris.

“He called several of our games, and obviously I had known Coach Meyer from him recruiting some of our players (in Texas). I developed that relationship with him, with him calling something like four of our games,” Morris said. “I was able to talk to him quite a bit and bounce some ideas off of him. He has obviously won a lot of games and is very well-thought of in this profession, so it was good to talk to him and how he used some of his players and how we used some of our players. That is what you do in this profession – it is a big fraternity. You just kind of bounce ideas off each other.”

Meyer took the job at Ohio St. prior to the 2012 season, and he knew who he wanted as his offensive coordinator – Morris. Once he found out that Morris wanted to stay at Clemson, he and Morris had several conversations about the tempo of Morris’ offense, something that Morris sees on film when he watches Ohio St. game film.

“I was flattered and honored that he reached out when he got back in the profession after taking a year off,” Morris said. “He was intrigued about what we do offensively, and he wanted to run a version of it, and so obviously when he reached out we spoke several times about it and that’s the way it was. Watching them, we trade film and to watch them and see some of the wrinkles they have added is something where you just see where you have traded ideas.”