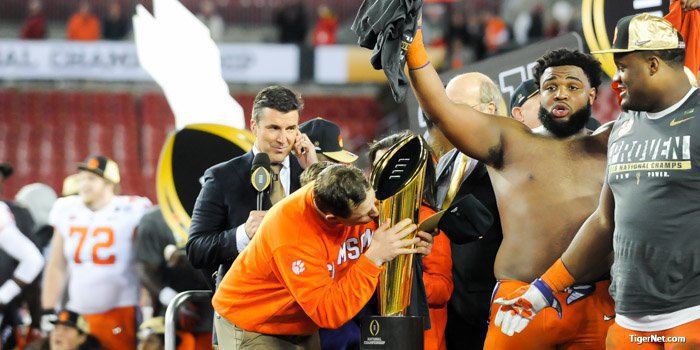 Can the Tigers make a third consecutive appearance in the College Football Playoff?

ATLANTA, GA – Can Clemson make a three-peat appearance in the College Football Playoff National Championship? The odds say that it’s hard for any team to make repeat appearances, much less a third, straight, but Clemson will attempt to do just that this season.

This year’s Clemson team must replace 23 lettermen, including 12 starters, seven on offense, four on defense and the punter. The squad will be young - the roster entering spring practice had just seven scholarship seniors. But that group has been battle-tested, playing 30 games over the last two years and winning 28 of them, including nine wins over top 25 teams, six over top 10 teams. Fifteen of the wins came away from home.

However, it’s that kind of attrition that makes it so hard to sustain that level of success per Tony Barnhart, known around the game as Mr. College Football. 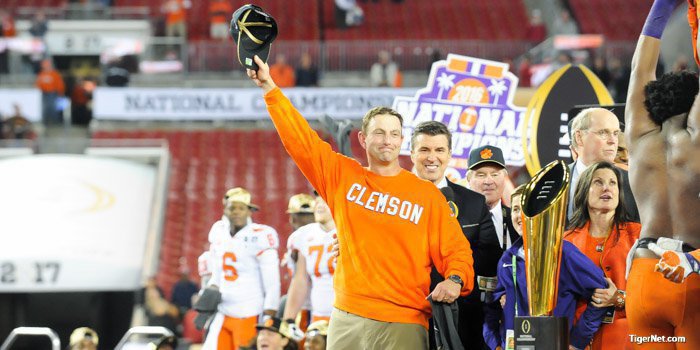 Can the Tigers make a third consecutive appearance in the College Football Playoff?"

“Which is why what they did last year was so amazing, because there were steps along the way - Pittsburgh and N.C. State and a tough game against Florida St. - there were so many spots where they could have stumbled and fallen out of it but they found a way to overcome the one loss and get there. The odds are stacked against you and they overcame the odds.”

Head coach Dabo Swinney says the Tigers have to look at this season as a new challenge.

“We don’t look at it as defending a title, we are attacking another,” Swinney said. “This team will have its own journey. It is a new year with new personnel and new coaches. It is a new challenge with new team chemistry. We have a windshield mentality. Last year was terrific and we celebrated that season in front of 70,000 people in Death Valley a week after the championship game.

“Our goal is to be the best we can be each year, and that never changes.”

One of the keys to Clemson’s championship run last year and a key to any season is building leadership and that is something that is developed during the offseason.

“We had great leadership last year. They were a committed group who wanted to make Clemson the best team in the nation," Swinney said. “We lost many of those players, but I see the same type of people in those we have returning. They were here last year and know what it takes.”

The biggest loss might be quarterback Deshaun Watson, and the coaches will have to settle on “the man” early if the Tigers are to make another deep run.

“Well, it obviously starts with the quarterback. They have talented guys but they have young guys and it will be interesting to see which way they go,” Barnhart said. “Look, Deshaun Watson was a generational difference maker. When you have him, you have a chance to win every single game you play. Regardless of who the quarterback is going to be, he isn't going to be as dynamic. But they have talent everywhere else and that is the key. He doesn't have to go out and win the game - he has to get the ball to the guys who can win it.”

This year’s Clemson team might follow the pattern of last year’s Alabama team – ride a talented defense and running game while letting their young quarterback make plays without feeling like he has to win the game.

“I think that is a good analogy. That is what Alabama did last season,” Barnhart said. “But you have to be consistent, and you can only lose once. When does that loss fall? Fortunately for Clemson last year, it looked like a bad loss but they didn't drop below four. If you don't drop below four you are still in it. That's the key. Going undefeated is almost impossible, so when you do have your hiccup you have to find a way to recover from it and that is what Clemson did. “