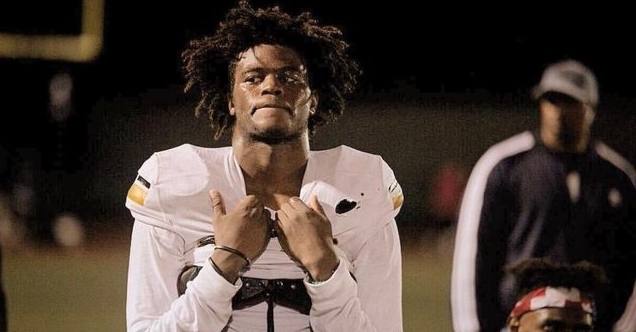 Turner-Gooden has offers from most of the major players.

Clemson’s presence on the West Coast has continued into the 2022 class, with offers currently out to two elite athletes in California. One of those elite athletes reported a Clemson offer on June 11th, calling Clemson his “dream school offer."

Larry Turner-Gooden is a 4-star athlete from St. Bernard HS (CA), listed as the No. 43 player overall and the No. 5 athlete in the 247Sports Composite rankings. At 6-1, 180-pounds, Turner-Gooden is being recruited by Clemson to come in and play safety. Turner-Gooden currently holds 30 offers, and the Tigers have made a strong impression with the elite athlete.

Turner-Gooden has been recruited by safeties coach Mickey Conn, and Conn loves the physicality that Turner-Gooden brings to the field.

“I’ve been in contact with coach Conn,” Turner-Gooden told TigerNet. “Coach told me that I was a banger and he wanted me to come play for him. My first impression was great with coach Conn. He was just telling me about himself on how big of a family person he is and letting me know what Clemson football is all about. So far, it’s a good start to a relationship and we just going to build up from here. He said he enjoys my film and how outstanding my ball skills was and coming down to make big hits.”

After building a relationship with coach Conn, Turner-Gooden received the Clemson offer on June 11th. What was it like to learn of a Clemson offer?

“Receiving the Clemson offer was a dream come true!” he said. “I mean obviously that’s a big offer to receive, but I treat it like any other blessings that I’ve received from all the other schools.”

Turner-Gooden is hoping to make a trip to Clemson during the season to learn more about the program and see his dream school in person.

“My dream school offer has been Clemson,” he said. “Just when I come to a game in the fall, I want to see the facilities and the culture of how fans are at a sold out game. I want to just learn what it’s like to be a Clemson football player.”

At this point in his recruitment, Turner-Gooden is keeping his options open and learning about every school that has offered.

“I’m looking for a school where I can go and be comfortable without football,” Turner-Gooden said. “A good education, good atmosphere, and a program I can see myself fitting in at.”

Turner-Gooden has received offers from schools all across the country, and the distance from home will not be a factor in his decision of where to attend school.

Turner-Gooden models his game after former UCLA Bruin and current safety with the New York Giants, Darnay Holmes. Turner-Gooden said his “energy, anger, and smartness” are his strengths on the field, and it’s obvious on film that he brings a lot of energy to every play. Turner-Gooden makes plays on both sides of the ball, lining up at wide receiver on offense and at safety on defense. Turner-Gooden is also a multi-sport athlete, running track and playing lacrosse for a few seasons. Turner-Gooden was recently invited and committed to play in the 2022 All-American Bowl.

Blessed to have received an offer from Clemson University #ALLIN ?? pic.twitter.com/O0UZzoUwav