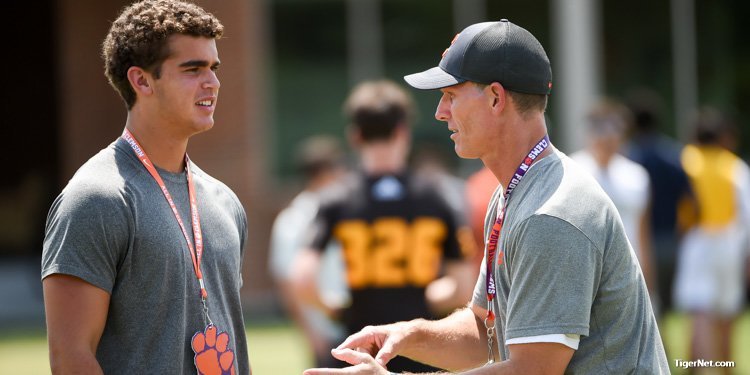 While Clemson isn’t in the business of doing summer official visits, the coaching staff made sure that California linebacker Spencer Lytle received all of the information and attention needed during his two-day stay.

Fresh off an official visit to Wisconsin, the 2019 Bellflower (CA) St. John Bosco linebacker traveled to Clemson for a two-night stay during the final session of Dabo Swinney’s high school camp and he came away more than impressed with everything about Clemson.

During the visit, Lytle spent time with Swinney, defensive coordinator Brent Venables and several of the players and it was those relationships that have Clemson in his top two, along with Wisconsin.

After watching film with Venables, where does Clemson’s linebacker coach see the 6-3, 215-pound prospect fitting in the defense?

“He said I am a perfect fit for what he likes to do on defense. He feels from the classroom, locker room to the football ball field, I am what he is looking for in a linebacker,” Lytle said. “He commented after coming out and watching me live at St. John Bosco, that he felt I could be special as a Clemson linebacker. He said prior to seeing me live he saw me only at SAM. After coming out to my high school said, I have the ability to play all 3 linebacker spots in his defense.”

While the visit was unofficial, Lytle was still able to see and do everything he needed to in order to make an informed decision.

“I don't think there is anything we didn't see. We even attended a business class and met with a professor,” he said. “We took a full facility tour again and saw literally every part of campus. They made sure I saw everything. I had dinner Monday night with Coach Venables, Jake Venables, Baylon (Spector) and Logan (Rudolph). Being able to sit down over dinner then hang out with those guys after to talk Clemson football was awesome.”

Lytle said it’s the people at Clemson that have the Tigers neck and neck with Badgers as a summer decision looms.

With both visits in the books, a decision could come at any time.

“In no order, Clemson and Wisconsin are currently at the top,” he said. “I really could make a decision anytime between now and August 1, but there is nothing scheduled right now.”