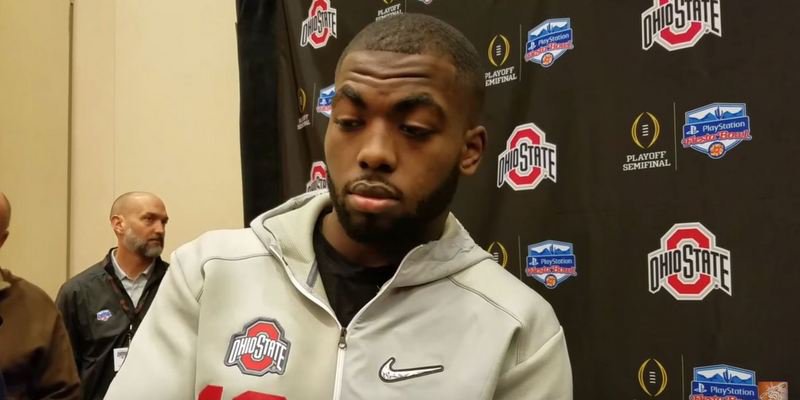 SCOTTSDALE, AZ – Clemson has some dudes.

Ohio St. quarterback J.T. Barrett and other members of the Ohio St. offense met with the media Tuesday morning at The Camelback Inn, and the Buckeyes were complimentary of the Clemson defense across the board.

The Tigers and Buckeyes meet on New Year’s Eve in the College Football Playoff’s Playstation Fiesta Bowl, but the Buckeyes were front and center Tuesday. It started with Barrett, who said he’s been impressed with the talent on Clemson’s defense,

“Yeah, I mean, they've got some dudes, that's for sure. I think they're at there at the top as far as just disrupting things,” Barrett said. “I think as a defensive line that's what you try to do is just cause havoc. I think they do a good job of that. Defense as a whole, they have a lot of things that they like to do, which makes them not predictable. So you kind of -- you have an idea of what they like to do, but then, too, you don't know because they've got a mix of everything.”

Senior guard Billy Price said the Buckeye offense has to be able to get a hand on Clemson’s defenders and said he can’t point out one particular player that causes problems.

“Well, we prepare for all of them. So I don't want to say that one person in particular is going to be a problem. Again, you've got to respect your opponent, you can't take them lightly,” Price said. “Their linebacker corps is very good. Their defensive line is very good, big, strong. They get off the ball. They're very explosive.

“If you don't get a hand on them and you don't slow them down, it's going to be a bad day for your offense. I reference the team up north (Michigan) for us. Kind of similar to Wormley and their interior guy, just how big and strong those guys were.”

All-everything H-back Curtis Samuel says the Tigers will blitz at any time.

“They have good linebacker play. They play together. They send a bunch of different blitzes, come at you at different ways,” Samuel said. “Their DBs are sound. They don't make many mistakes. And I feel like that's what makes a defense good, not making too many mistakes and playing together.”

“I'm familiar with Brent. I coached in the Big 12. I knew Brent back then. He left Oklahoma and went to Clemson.,” Warinner said. “And we played against him a couple of years ago in the Orange Bowl. So he does a great job of mixing up his defenses and applying pressure. So I think Brent is an outstanding football coach. And he'll have this team ready to go. And it will be exciting to see what they bring to the table, because they'll have some wrinkles for us.”

Warinner said one of Venables’ strength is disguising what his defense will do.

“Yeah, I think he doesn't have tendencies. If you mean -- if you really study the whole body of work for the season, it's hard to say that they have tremendous tendencies, which I think is intentional,” Warinner said. “And I think that's also what makes them good is they have really good players and they aren't predictable. Therefore, they're hard to game plan for.”

He then said he doesn’t see an advantage for either team along the lines of scrimmage.

“Not necessarily. I mean, they are stout inside.,” he said. “They do have some big run-stoppers in there that play fast, and they do rotate people through there. So they have a lot of depth.

“But, I mean, we just have to see how our players match up as the game goes and try to get a feel for each other.”

Warinner was also asked about Clemson’s size along the defensive front, and he said he was impressed with defensive end Christian Wilkins.

“Good football player. Physical. I think he uses his hands well,” he said. “I think that's why they were able to move him out there, and he has a good first step. So I think they thought he could handle the edge and they put him out there and he's done a nice job for them. Really nice job.”