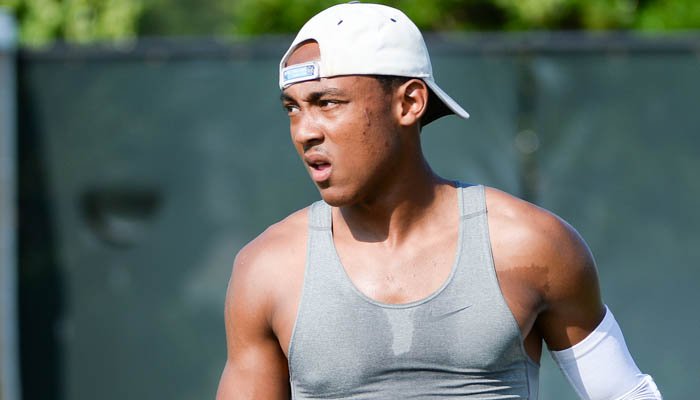 Dawkins will enroll at Clemson in 2016

Brian Dawkins, Jr. will follow in his father’s footsteps and play football at Clemson, but at the end of the day he wants to make his own name on and off the playing field.

The Littleton (CO) Valor Christian cornerback – and son of former Clemson great and NFL Pro Bowler Brian Dawkins – plans to attend Clemson as part of the 2016 recruiting class after spending a year in prep school.

The younger Dawkins told TigerNet this week that while playing at his father’s alma mater certainly factored into his decision, he saw Clemson as a place that he could grow and mature as a football player and a man.

“I am already familiar with Clemson because of my dad, but it was 100 percent my decision,” Dawkins, Jr. told TigerNet Tuesday. “I see it as a really great place to be, and place to get pushed but yet have a Christian mindset during the whole process. It will definitely be a blessing. To follow in my footsteps and to do it at the place where my dad started his great career is amazing. I can't wait.”

One of the main reasons Dawkins, Jr. decided to continue the Clemson legacy were the similarities between his father and his future position coach Mike Reed

“I have a great relationship with Coach Reed,” Dawkins said. “He teaches and I believe he will teach the same things my dad taught me. Those are the same things that allowed him to have a successful career in the pros, so I am really excited about that. They both have energy on the field, even though they aren't playing. They both bring intensity and energy.”

Before he can don the orange and white, however, Dawkins, Jr. will spend a year at Fork Union Military Academy in Virginia.

“I think it will be a great opportunity [attending Fork Union],” he said. “It was my choice to go to Fork Union. It will help me in college because I can get a head start and I will have a much easier transition at Clemson. I just want to get faster, stronger, get a better football IQ and help ease that transition from high school to college.”

As a senior, Dawkins, Jr. had over 100 tackles, six interceptions and forced six fumbles.