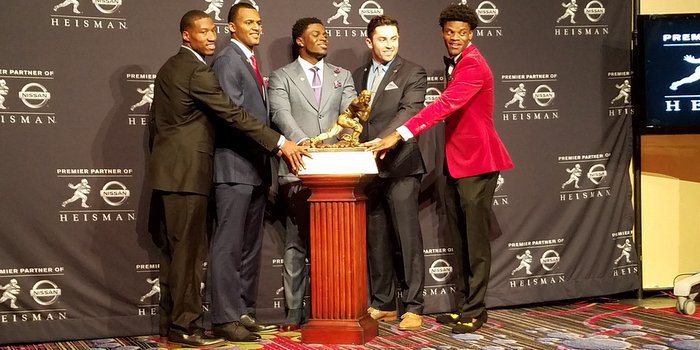 The five finalists take a photo with the trophy

NEW YORK, NY – The outcome wasn’t what Deshaun Watson and the Clemson faithful wanted, but the 2016 Heisman Trophy race was a lot closer than most would’ve ever thought.

The national pundits touted Lamar Jackson – the eventual Heisman Trophy winner – as the runaway winner after he started the season with a bang, but Watson’s surge during the month of November made the race much closer.

Ballots were emailed to 870 media personnel across the nation plus 58 Heisman winners and one fan ballot, for a total of 929 electors. Jackson polled 2,144 points to capture the award over Watson (1,524 points), Baker Mayfield of Oklahoma (362 points), Dede Westbrook of Oklahoma (209 points) and Jabrill Peppers of Michigan (208 points).

Who received the votes

When the votes were cast

The most telling statistic is that 16-percent of voters cast their votes before the conference championship games were played last weekend. Jackson received 45-percent of the votes during the first week of voting, and 40-percent during each of the final two weeks.

Watson received just 10-percent during the first week but saw his number rise to 25-percent and 30-percent in the second and third weeks that voting was open.

Clemson’s signal caller did best in the Mid-Atlantic region (South Carolina to Pennsylvania), receiving 274 votes. However, Jackson won the region with 350 total votes.