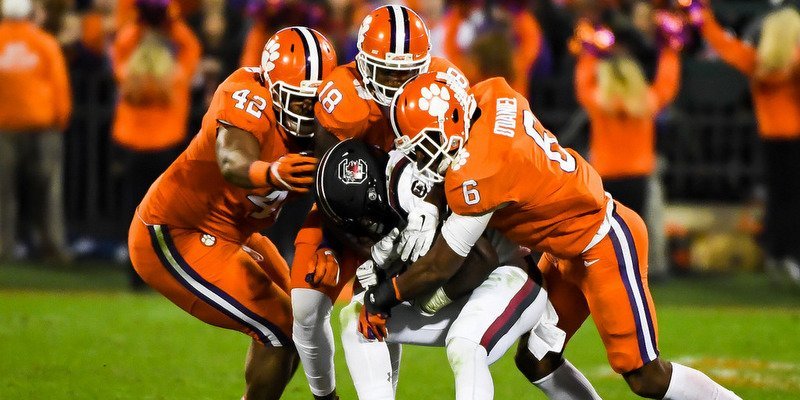 CLEMSON – Clemson versus South Carolina is just like any other rivalry. Just ten times bigger.

Senior linebacker Dorian O’Daniel has been a part of the Tiger and Gamecock hatred for five years, and he tells the younger players that it’s unlike any other.

"Pretty much just compare it to any rivalry they had in high school but times 10 at the college level,” O’Daniel said earlier this week. “Tensions are a lot higher, fan bases are a lot bigger and I feel like there's a lot more pride involved. That's how I would explain it."

O’Daniel learned what the rivalry means during a recruiting visit – the Tigers had just lost another in a string of five straight defeats at the hands of their rivals.

"I kind of came in from day one understanding,” he said. “I know during one of my visits early on in the recruiting process when I came here, and we had lost that night and it just had sucked the life out of the Valley and players were upset obviously and from then I just kind of understood what it meant. It's a battle of the state."

O’Daniel didn’t play during his redshirt season but has gone 3-0 against the Gamecocks as a player. He knows how special it would be to go 4-0.

"Definitely. And we're playing with a lot of pride behind that to be a senior class that hasn't necessarily lost to them is something I take pride in,” he said. “And the rest of the team that's been here during that time takes pride in and hopefully we execute the game plan and can go out and go undefeated."

He also knows it’s the biggest game of the season to many fans and players, something he learned from watching the end of the five-game streak.

O’Daniel went on to say that Clemson and South Carolina fans are different.

"Just South Carolina fans and Clemson fans are a lot different. I don't think there's any question about that, but just the difference in atmospheres,” he said. “Just early on in my career when I did go into South Carolina and I obviously didn't play as much, just seeing how fans treated our players and some of our staff just rude honestly, but you know it's a hostile environment and it adds to the rivalry. We can't really control that, we have to go out and just keep tunnel vision and not let the outside distractions interfere with our play."

O’Daniel and the rest of the defense will be taking aim at South Carolina quarterback Jake Bentley, who has 15 touchdowns and nine interceptions this season.

"Just like any quarterback you're going to get a lot better and more confident as the season goes on,” O’Daniel said of Bentley. “I feel like he does a good job keeping his eyes downfield while he does scramble. He's not looking to run, rather than make something happen while he's trying to avoid pressure in the pocket, so he's just progressed as a player looking to make plays on the run."