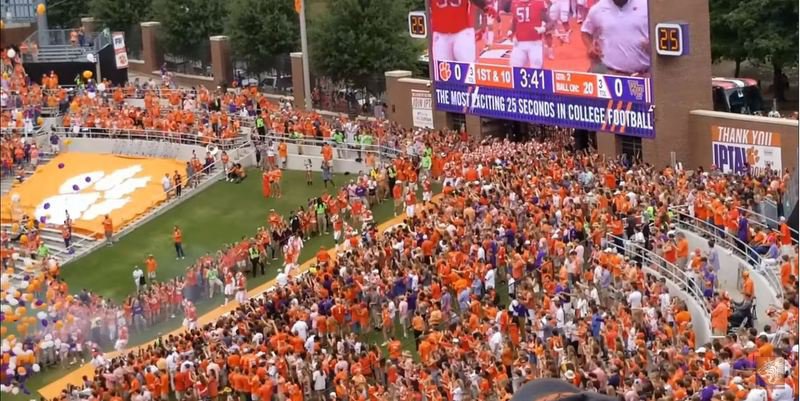 CLEMSON – Home football games in Death Valley are better when The Hill is packed to capacity, and a little bit rowdy, and the Board of Trustees wants to make sure the slope doesn’t have any green patches on game day.

The Hill had attendance problems last season, leading the university's student government to make changes to the student football ticketing policy in mid-October after a debate on and around campus.

The changes, including when students can register for tickets and allowing returns of tickets that would go unused, followed public debate over the distribution of tickets and who was at fault for unfilled spots on Memorial Stadium's hill. There were too many noticeable empty spaces during both the Boston College and Wake Forest games last season.

The empty spaces even prompted head coach Dabo Swinney to tell Clemson's fans ahead of the Wake Forest game that they needed to "wake up and show up."

Radakovich laughed during Wednesday’s media session when he was asked about any changes for the upcoming season, saying that the Board of Trustees made it clear that The Hill has to be filled with bodies.

“I was meeting with the Board of Trustees, and I got done with my little dog and pony show, and I asked if there were any questions. They said, 'Yes! Fill The Hill.' So when your bosses tell you to fill The Hill, that is what is going to be high on your priority list,” Radakovich said.

The Athletic Department and student government are working to create a better ticketing system for the students.

“Mason Foley, the new student body president, has been fantastic,” Radakovich said. “He and his team have worked with Graham Neff a lot over the spring semester, and we are looking at some different entry options and some different types of processes to make sure that we get the tickets in the hands of the students that desire them. And to do that, that probably indicates a process change that we are close to having done and approved by the students and everyone on campus. I think as the students roll in in August they will have some different processes to work through and I think they will be ones that will help solve the issue and answer that question.”

In 2017, Clemson students were the only students in Division 1 athletics to have access to completely free tickets to football games, and that will remain the same in 2018.

“There are some unique Clemson pieces here and having the tickets free is an important part of that,” Radakovich said.