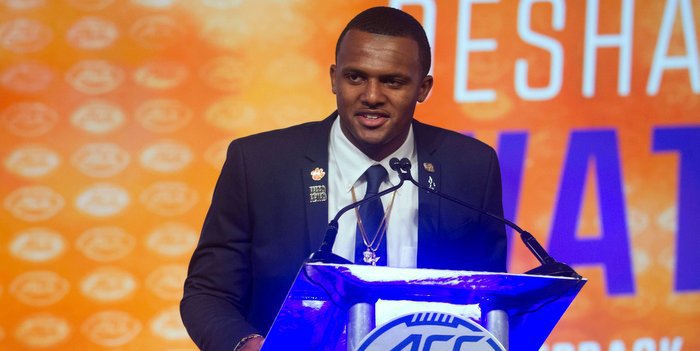 CHARLOTTE, NC – With apologies to former Clemson quarterback Chad Kelly, the best college quarterback in the country was in Charlotte Friday morning.

Clemson signal caller Deshaun Watson met with a throng of media Friday morning and early afternoon at the ACC Football Kickoff at The Westin in downtown Charlotte, and difference in Watson’s on-field persona and his off-the-field persona is striking.

On the field, Watson is fearless and stares down opposing defenses with a calmness and maturity that belies his years. On the field, he isn’t shy about celebrating a great play or even going to his trademark (and Cam Newton’s) trademark move – opening Superman’s cape.

In front of the media however, Watson is almost shy and he’s unassuming, almost unaware that he’s become the face of not only the Clemson program, but perhaps the ACC and college football as well. Watson isn’t brash in front of the cameras, and his game is so strong he doesn’t have to tell you how good he is. He isn’t going to say he’s the best quarterback in the country – he’s going to go out on the field and prove it.

During the interview session with the writers, Watson mentioned that he feels like he is “one of the best” players in the country when he was asked about the Heisman hype.

“I embrace it,” Watson said of Heisman hype, “because I feel like I’m one of the best in the country. Every athlete should feel that way. If you don’t feel that way, you’re cheating yourself. God put me in this position for a reason. This is what I’ve worked for. But I understand I have to go earn it. Nobody is going to give it to me in the preseason.”

I interrupted him to remind him of Kelly’s comments, and asked him point-blank if he thought he was the best quarterback in the country.

He answered in his special way.

"Chad's supposed to say that," Watson said. "It's competition, it's marketing. Everyone writes stories on that. He'd be cheating himself if he didn't say that. That's what every quarterback should be saying. You should never take a back seat to anyone."

"I embrace it — it's fun," Watson said. "This is what I worked for, what I've dreamed about. I just take it and run with it. I just go about my business and prepare as much as I can in the right way, but it's more than being about myself. The game is bigger than me and life is bigger than me.

“The Heisman, I mean of course everyone wants to be the Heisman winner and go up there to New York, but it’s gonna come if it comes. It’s something that’s kind of out of my control. I can perform at a high level each and every week, but I can’t go up there and say I’m the winner, that’s people’s opinions and what the voters have to say.”

Watson was asked about the Deshaun Watson brand, and he once again said all the right things.

“A good brand for Deshaun Watson,” Watson said. “Good guy on the field, respects the game and really understands that football has been there longer than he has and can be taken away from him, every second, every minute.”

Earlier this week, Alabama head coach Nick Saban said that Watson was the best college quarterback since former Auburn star Cam Newton, and Watson did a typical Watson thing – he thanked Saban for the compliment.

“It’s just cool to have that from a guy who’s been in the game at both levels for a long time. I want to thank Nick Saban for the compliment,” Watson said. “He’s a great guy, respectful guy, and we respect each other.”

Watson is without a doubt one of the top stars of college football, but he doesn’t act like it. And that might be why he’s one of the best, if not the best.