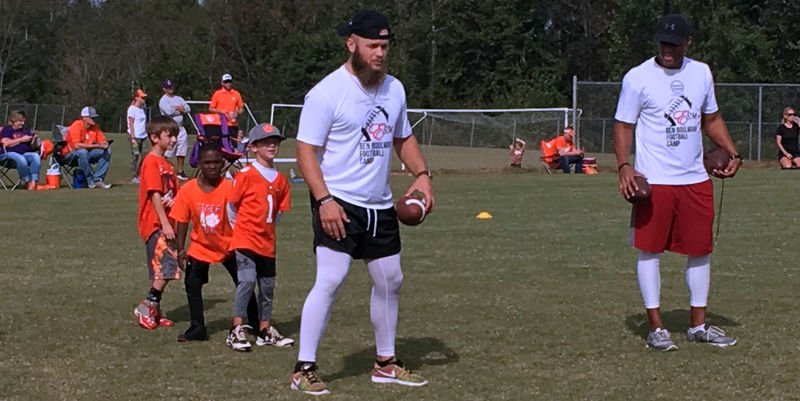 Boulware coaches during his camp Saturday (Photo by Spencer Kelley)

The former Tiger linebacker held the Ben Boulware football camp Saturday afternoon at Nettles Park, and Boulware said the camp is a chance to not only give back to the community, but he hopes to provide some kind of spark to a kid that might not be big enough or fast enough.

“I think I speak to a lot of kids out here. I'm not the biggest guy in the world,” Boulware told TigerNet Saturday. “I'm not the fastest or this that or the other and I feel like a lot of these kids will be in the same situation as me and can see that the dream is possible. I feel like I accomplished what I was able to accomplish because of hard work and going to these kinds of camps at their same age and just learning in every area so I'm just trying to give back and teach these kids what I know and what I've experienced over the years.”

Boulware didn’t earn an offer from Clemson until Brent Venables took over for Kevin Steele after the 2011 season. He molded his four-year career on proving all of the doubters wrong and working harder than everybody else. As a player who knows the value of good coaching, he can see himself working as a coach one day.

“The thought has crossed my mind. I'm definitely going to try to keep pursuing football for a little bit, but if that doesn't work out then we'll see what avenues open up,” Boulware said, “It will either be that or something with fitness. I haven't really narrowed it down yet. I'm still pursuing football and hopefully, that works out for at least a little bit.” 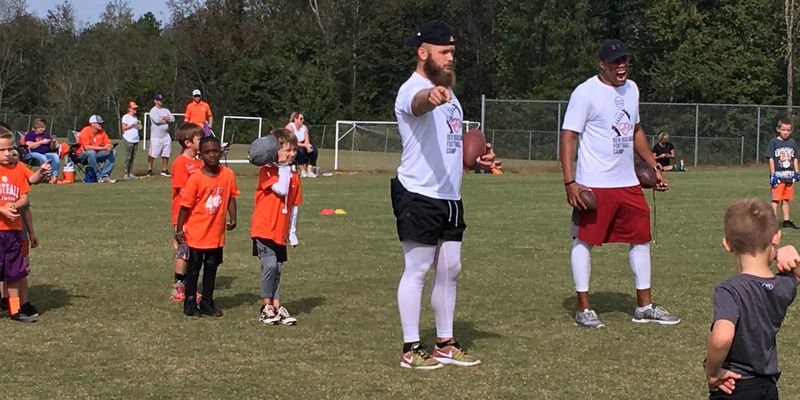 Boulware coaches during his camp Saturday (Photo by Spencer Kelley)"

The camp was sold out, and Boulware said there might be more camps in the future.

“Absolutely. They told me we have 140 kids here and any more than that it would just be tough. You'd have to bring in more coaches. It takes a toll on you,” he said. “It's five hours of screaming and it will wear you out. I definitely think there will be more camps in the future if we keep having a great turnout. We have a lot of returning campers who went to my first camp that came back for this one, so obviously, something is going right. Hopefully, there will be more in the future.”

Boulware walked off the field a winner for the Tigers, his last game a title win over Alabama in the College Football Playoff National Championship in Tampa in January.

“It was really cool,” he said. “Last year was a really special year to kind of go out with my brothers and the guys you've been through everything with - Deshaun (Watson), Jay (Guillermo), (Jordan) Leggett - all of those guys and to get to go out on top and bring the championship back for the first time since 1981. It was a really cool feeling to leave a legacy and set the standard for future teams. The standard has been set for this year's team and for years to come.”

The championship meant a lot to the fans, but it meant even more to a kid that grew up dreaming of Death Valley, just like the kids at Boulware’s camp Saturday.

“I think for me it was because I've experienced every side of it,” Boulware said. “When I was speaking at the stadium and saying, 'I was one of y'all,' I was these kids 15 years ago. I grew up going to the games. I remember growing up in Lot 5, playing football, running on the field, getting players gloves. I experienced every side of it - as a fan, as a recruit, growing up and going to Clemson and then winning a national championship. That's why I was saying, I'm one of ya'll. I've been in their shoes. I've been in every one of these kids shoes who want to play college football one day and I feel like I accomplished a good amount of cool stuff.”