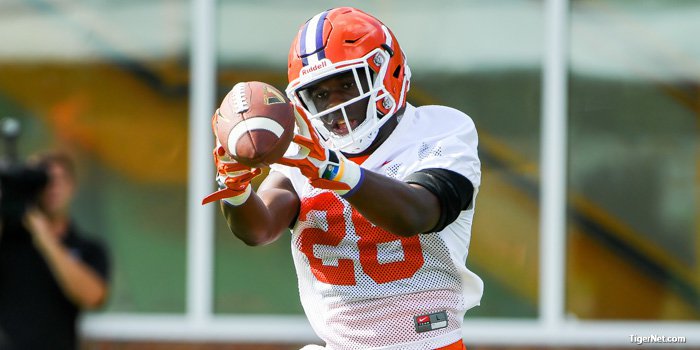 Center Jay Guillermo missed the scrimmage as he continues to go through concussion protocol, but there were no new injuries to report. Swinney said it was a typical first scrimmage – a mixed bag of good and bad.

“It's been a good start a week and a half into camp. It's been installation and fundamentals and a little bit of live work mixed just here and there in trying to get them ready for today so we can have a good situational scrimmage. Just making sure we get the work we need while getting the evaluation we need as coaches,” he said. “It was a typical first scrimmage. It was atypical in some ways - I saw some really clean plays by some guys. But typical in that we had too many penalties, a lot of offsides, pass interference and holding. We had some procedural issues on both sides.

“We have to clean some of that up on the practice field. But overall the effort was there. I was very pleased with the effort and how they competed. I have some guys we could throw on the bus right now and go play, but we have a lot of guys that aren't ready. But part of the process is putting them through what we're putting them through. This will be a good film for us to go watch.”

He then said that several offensive players would stand out on the film. 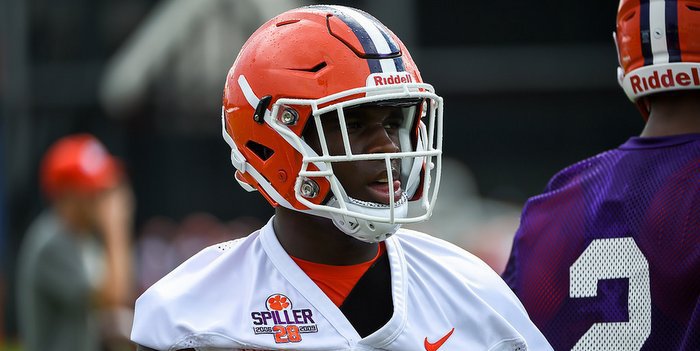 “I thought our backs ran well. I thought all of our quarterbacks did some good things. I thought they did some nice things and played really well,” Swinney said. “I thought the running game was strong. (Wayne) Gallman, he looks different than he did last year. That is what confidence and work and maturity will do for a guy. I can say the same thing for (Tyshon) Dye, (C.J.) Fuller, and (Adam) Choice. And (Tavien) Feaster, it's so easy to see his talent. He has to learn to play in another gear. His first run would have been a 60-yard touchdown. Instead, it was a 30-yard run because he cruised a little bit. He has to learn to turn it up a little bit. The backs have all done what we've asked them to do.

“Deon (Cain) had a touchdown catch, and Cornell Powell. He is strong. He has a lot to learn but he makes plays and breaks tackles. We have a lot of cleaning to do for him and Overton. But Cornell, I thought he shined today.”

There were highlights on defense as well.

“Defensively, I've been really impressed with Kendall Joseph. Chris Register is one of the most improved players on the team. We've been working Jabril at end some, too,” Swinney said. “He's done a nice job out there. It's a spot where he might get a little more opportunity this year. We are just trying to even our numbers out and get everybody in the right spot. K'Von Wallace had a good day and had an interception, and Trapp had an interception. Overall, the first group was outstanding on first and goal from the nine.”

Swinney said defensive back Korrin Wiggins – who tore his ACL on August 12th last season – isn’t back to normal but is getting close.

“I would say no. He still has some rust he has to knock off,” Swinney said of Wiggins. “He made some nice plays today, and had a couple of sacks off the edge. He's still got a lot of work to do to get to where he needs to be.”

The Tigers will hold a mental practice Thursday, hold a team outing at The Reserve on Friday and be back in the stadium for a scrimmage on Saturday.

“Saturday is another step. This was a tough day. Last night was one of the toughest, most physical practices we've had all camp,” he said. “And it was eight or nine when we left and then we are back over here at 7:45 this morning. This is a tough time in camp. And tomorrow is a mental practice day. We will back off them physically a little bit. We have a lot of meetings and have a walk-through on the field for about 45 minutes and have some teaching. Friday will be a really tough Friday and do some competitive work Friday morning. Saturday will be a big day for a lot of these guys.”