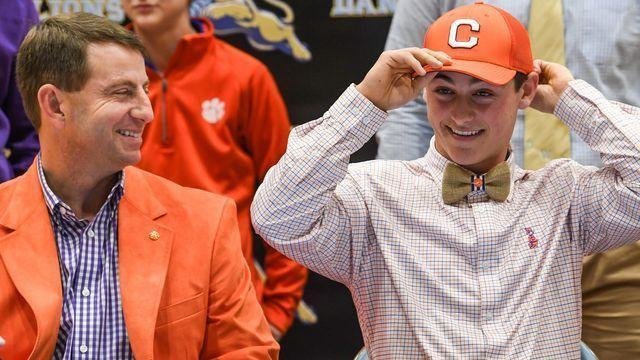 Swinney signs his LOI as his parents look on

Playing for the Clemson program he has grown up watching is a dream come true for Drew Swinney.

Swinney, a 2018 wide receiver out of Central (SC) DW Daniel, is the son of head coach Dabo Swinney and the younger brother of Clemson wide receiver Will Swinney. Drew accepted a walk-on offer to play for the Tigers and will join his brother and his father as a member of the Clemson program this summer.

“Oh yeah. Without a doubt. Just being around it my whole entire life, I can really see the ins and outs of it and not just from an outside perspective,” Swinney told TigerNet. “I can see it from the inside out perspective and what goes on day-to-day and how the people are. It’s an incredible place. It’s the best place in the country and there’s no other place I’d rather be.

“I’d say probably around my freshman or sophomore year of high school is when I knew I wanted to play here. I had always played football, basketball and baseball. I’ve always loved football more. I started playing rec basketball, instead of for the school, so I could focus on football more. I stopped playing baseball, but I’m actually playing again this year. Probably around that time is when I first knew. It’s always been a dream of mine.”

Swinney said that he knew in middle school that Clemson would be his college of choice. 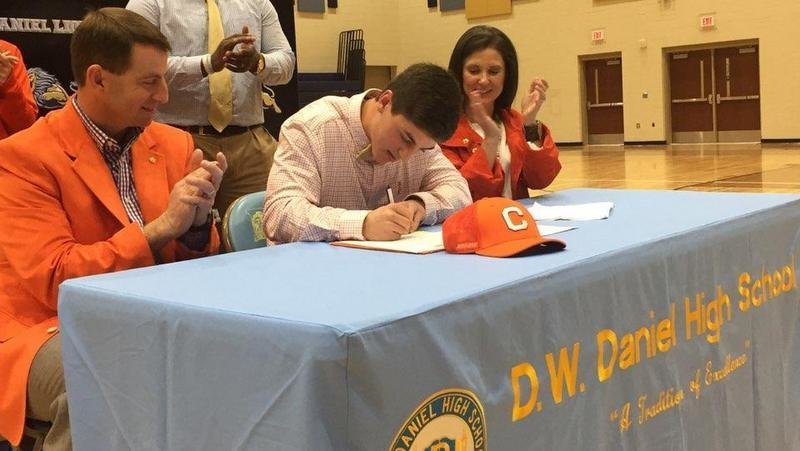 Swinney signs his LOI as his parents look on "

“Probably in middle school and just talking to my dad about where I would want to go to college. It was like, ‘Do I want to go to Clemson?’ Will and I were both an automatic yes,” he said. “Clay, on the other hand, he’s talking about going to Kentucky to play basketball.”

He then said that he’s excited about the new part of his life.

“Yeah, it’s just the college experience. It’s weird not seeing Will as much,” Swinney said. “I still see him a lot because he’s close to home. It’s cool seeing him out on the field. I’m just really excited to start this new phase of life. It will be fun and I’m sure I’ll learn a lot. I’m excited to just get to work.”

He will also see his father in a different light, although he’s been coached by him since he was a small child.

“I think it will probably be the same. Even in little league, he was tough on us,” Swinney said. “He coached us like the college players. That’s what my mom says all the time. I’m sure it will be different. I think I’m prepared for it. I’ve talked to Will about it and he said it’s not too bad. He’s our dad and our coach, so obviously we’ll be held more accountable, but it’ll be fun.”

Drew was an all-region player in 2017 after catching 30 passes for 405 yards and three touchdowns. However, he might challenge Will as the holder on field goals and extra points.

“I also held in high school so there might be a little competition there,” he said with a laugh. “Just finding my role no matter what it is. I’m going to do my best. I’m just going to work hard, put my nose down and give it my all. I’ll probably end up redshirting this year to get in the weight room for Power Hour and see how it goes. Wherever they tell me to go, I’m going to do my best.”

Clemson’s head coach says he is excited about having another son around the program.

“Drew’s already said he’s going to beat (Will) out as the holder so we’ll have a little competition, but nah, those two, they’ve really been more like twins their whole life. They’re only 17 months apart,” Dabo said. “They’ve just been really best friends forever, so I was hopeful Drew would come. But they’ve got to make their own decisions. He’s really excited and had a great year this year. Drew is an inspiration to our family. He’s a kid coming in here that’s getting to live his dream. It’ll be awesome.”