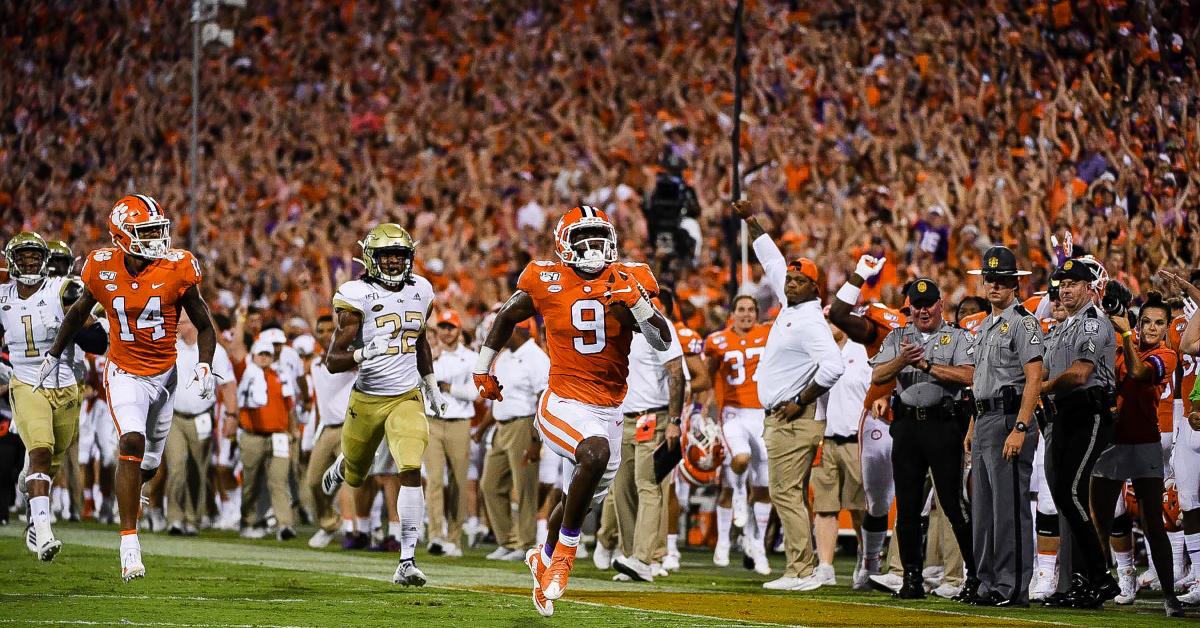 CLEMSON – Jeff Scott knows Texas A&M defensive coordinator Mike Elko all too well and expects Saturday’s matchup in Death Valley to be another stout test for the Clemson offense.

Elko was at Wake Forest from 2014-16. In 2016, the Demon Deacons' defense ranked in the top-20 of the FBS in fumbles recovered (third), turnovers forced (10th), sacks (12th), defensive TDs (17th), red zone defense (17th) and scoring defense (20th). Wake Forest was one of four schools in the FBS to rank in the top-20 in turnovers forced, sacks and scoring defense in 2016 (the other three schools -- Alabama, Clemson, and Washington -- qualified for the College Football Playoff).

“Obviously have a lot of respect for them, a very good program," co-offensive coordinator Jeff Scott said Monday. "Very strong defense, their defensive coordinator Mike Elko is one of the best in the business. We played him several years at Wake Forest, 2014 to '16, and then obviously last year Texas A&M. They finished the year last year third in the country in rush defense. I know after one game, they're No. 6 in the country in rush defense already.

"So, they do a really good job up front. Put a lot of pressure on your offensive line and tight ends. They are very long and athletic -- can run. They've had to replace a few guys on that front seven, but very talented guys."

Clemson’s wide receivers will face a stiff test against the Aggie secondary.

“The other thing that stands out is their secondary is one of the best we will play all year. Very long," Scott said. "Their top five corners are all 6-2, 6-3 — so very long, athletic guys that will challenge you. So, that will be a big matchup for us going into the game. But our guys are excited, and I think we're ready to get into the routine of normal game week and ready to put all our focus on A&M.

"They're going to be a group that can challenge us and we're going to have to play with great technique and work on our releases. Because they are physical and long, they can really run and it will really be a huge matchup in this game."

Clemson defeated ACC opponent Georgia Tech last Thursday night in the season opener, and Scott is appreciative of the fact that the Tigers opened with a bigger name opponent ahead of what might be the Tigers’ sternest test of the regular season.

"There's no doubt we're playing one of the best teams on our schedule, right here, early on," Scott said. "I think the fact that we were able to open up with a conference opponent Game 1 -- and I think we know a little more about ourselves after Game 1. Obviously, we're still early in the year. There's no doubt that's an advantage for us."

Scott was asked if the Aggies played quarterback Trevor Lawrence different than they did Kelly Bryant last season.

"Trevor didn't play a whole lot in that game if you really go back and watch it. He just got thrown in there a few series kind of early in his freshman year," Scott said. "I think they played us very similar to how Coach Elko's played us in the past. Whenever he was at Wake Forest, they liked to bring a little more pressure whenever they play us and try and get the ball out. I think they've got a really good secondary that they feel confident in the back end.

"I expect them to be very confident in their defense and come in and be who they are. It's going to come down to the fundamentals: blocking and tackling and throwing and catching and defending the pass and all those things."