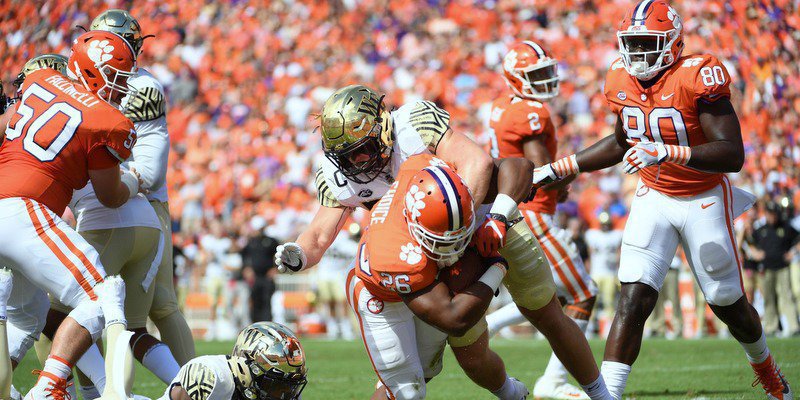 For nine minutes Saturday against Wake Forest, Clemson looked like the defending national champion and the No. 2 team in the country.

After that, Clemson looked like a team that was ready to get out Memorial Stadium as fast as it could.

The Tigers started strong with 14 points in the first nine minutes, and after that, the offense didn’t do a whole lot in a 28-14 win. The defense pitched a shutout for three quarters, but there were a few issues with that group, as well.

It was hard to figure out what to take from this game. It wasn’t awful, but it wasn’t great either. It wasn’t a game that will go on the highlight reel to showcase what Clemson has become, but it also wasn’t a game fans should stomp their feet about and scream and fuss about.

It was just somewhere in the middle.

Saturday just marked another win for Clemson, and there’s really nothing wrong with that.

Clemson had a 28-0 lead early in the fourth quarter and never was in any danger of losing this game as it improved to 6-0 overall and 3-0 in the ACC. Following a pattern from the first five games this season, Clemson’s opponents got some points in the fourth quarter when the outcome was no longer in doubt.

That happened against Louisville and Virginia Tech in the previous two games, and Wake Forest got 14 points in the fourth quarter Saturday. There is nothing wrong with getting some backups playing time and seeing how those players will react in those situations. Clemson did that again Saturday, and it’s a good bet, the Tigers will continue to follow that game plan.

Sometimes that line of thinking keeps games from becoming complete blowouts that fans would like to see, and that certainly was on display Saturday.

Who knows what would have happened if Kelly Bryant had not suffered an ankle injury? Clemson already was sputtering at times on offense before he went down, and it’s hard to know if that would have changed if Bryant returned to the field.

What fans would like to see change is the offense’s struggles with efficiency in Clemson’s home games. The Tigers have been dynamic on the road in wins at Louisville and Virginia Tech, but in their past three home games – against Auburn, Boston College and Wake Forest – they haven’t been as strong on offense.

Give credit to Auburn, Boston College and Wake Forest as all three have really good defensive fronts, but it would be nice to see the offense play better at home. The Auburn game was a real struggle on offense except for two drives. The game against Boston College was a struggle for three quarters until a dominant fourth quarter. And there was a long stretch Saturday in which the offense just didn’t do anything.

The good news? Clemson is back on the road next week with a trip to Syracuse, and maybe that will get the offense going again.

That said, it’s really hard complain much about being undefeated through six games and in perfect position to head back to the ACC championship game. That’s a big goal for this team, and it took another step in that direction Saturday even if the game never turned into the blowout it looked like it would be in the first quarter.