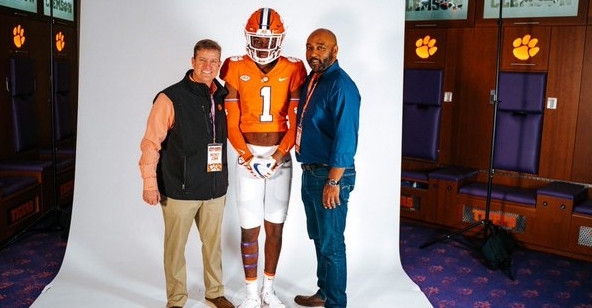 Clemson defensive coordinator Brent Venables has an ideal body type for the guys who play safety in his system. Guys like TJ Green, Jayron Kearse, Tanner Muse and Isaiah Simmons have all been long, athletic, and not afraid to come downhill and help defend the run.

Enter Khari Gee, the 6-3, 193-pound safety from Woodward Academy (GA) Atlanta. The 4-star has racked up over 30 offers from schools around the country, but now his focus is on three schools. Clemson is firmly in the hunt to land Gee, along with Oregon and LSU. TigerNet caught up with Gee to talk recruiting and what makes him a special player on the field.

Gee received a Clemson offer in January ’20, just days ahead of a visit to Clemson for Junior Day. The visit to Clemson confirmed everything that Gee had heard about Clemson and put the Tigers in a good position with the Atlanta safety.

“The visit was great,” Gee told TigerNet. “The facilities were top-notch. The coaches were welcoming and treated me like family.”

Gee does not have a return visit set-up to Clemson or any other school at this time, but he remains in contact with the Clemson staff. Gee hears from cornerbacks coach Mike Reed, safeties coach Mickey Conn and Brent Venables. What do the coaches tell him about coming to Clemson?

“I hear from someone on the staff a lot, probably like every other day,” Gee said. “They are really just trying to feed me information on Clemson, and they keep telling me how much of an impact I could bring.”

Gee recently released a top-3 of Clemson, Oregon, and LSU. Gee has had the chance to visit all three places and came away impressed with the coaches from every school.

“Both of those places were great as well,” Gee said of his visits to Oregon and LSU. “The coaches showed a different type of hospitality and were very welcoming at Oregon. And LSU’s campus was very nice. I had a good time speaking with Coach O.”

Gee said that Clemson is “different” after his visit in January, but what exactly makes Clemson “different”?

“The atmosphere of the place,” he said. “The love that Coach Swinney shows and the stadium.”

Gee hears from Clemson commits Jordan Hancock and Dacari Collins about joining them in Death Valley. Gee could be nearing a decision soon, possibly before the start of his senior season of football. What does the perfect school look like to Khari Gee?

“Great fan base,” he said. “A coaching staff that makes me feel welcome and at home. A great education for life after football and a good town around the school.”

What player does Gee model his game after? And what kind of player would Clemson be getting?

“Probably Jamal Adams,” Gee said of who he plays like on the field. “I would say I’m a versatile safety. I can hit hard, and I can cover.”

Gee is currently rated as a 4-star by 247 Sports, the No. 319 player in the nation, No. 15 safety in the nation and the No. 28 player in Georgia. Gee finished his junior campaign with 62 total tackles, 4 tackles for loss and 1 interception.