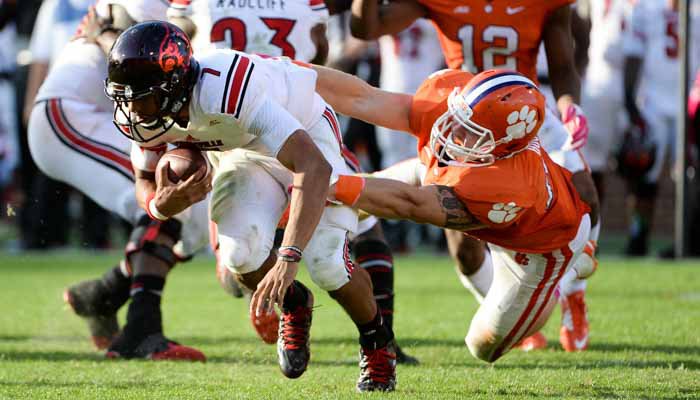 Ben Boulware
Jr. Outside Linebacker
#10 6-0, 235
Anderson, SC
View Full Profile was a fan favorite at Clemson long before he stepped foot on campus, and his wonderful interviews and reckless style of play have only endeared him to the Clemson fan base even more. In 2015, those fans will get to see more of Boulware as he takes over no at the WILL linebacker spot for Tony Steward

CAREER STATS: Boulware has 83 tackles, 6.5 tackles for loss, one sack, two interceptions for 48 yards and a touchdown, six quarterback pressures, one pass breakup and two recovered fumbles in 399 snaps over 24 games (two starts) in his career.

Stephone Anthony
Linebacker (2011 - 2014)
#42 6-3, 245
Polkton, NC
View Full Profile was suspended after a questionable hit on a South Carolina player in the regular season finale and had to sit out the first half. Boulware had a team-tying-high six tackles, 0.5 tackles for loss, a recovered fumble and a 47-yard interception return for a touchdown against No. 24 Oklahoma. His touchdown came off of a deflected pass and he managed to weave his way through the Sooners 47 yards for the score, giving the Tigers a 17-0 edge late in the first quarter.

On the season, he had 58 tackles, five tackles for loss, one sack, six quarterback pressures, one pass breakup, a 47-yard interception return for a touchdown and two recovered fumbles in 326 snaps over 13 games (two starts) ... had four tackles in 18 snaps at No. 12 Georgia on Aug. 30 ... had three tackles in 31 snaps against SC State on Sept. 6 ... had four tackles in 16 snaps against North Carolina on Sept. 27 ... had a team-high 12 tackles, a game-high three tackles for loss and one sack in 59 snaps against Louisville on Oct. 11; it was his first career start; named team co-defensive player-of-the-game ... had three tackles and a key pass breakup on the Eagles’ last drive of the game in 31 snaps at Boston College on Oct. 18 ... had three tackles, 0.5 tackles for loss and a team-tying-high three quarterback pressures in 34 snaps at Wake Forest on Nov. 6 ... had seven tackles in 27 snaps at No. 23 Georgia Tech on Nov. 15; named team special teams player-of-the-game ... had a team-tying-high 10 tackles and one tackle for loss in 27 snaps against Georgia State on Nov. 22 ... had four tackles and a recovered fumble in 23 snaps against South Carolina on Nov. 29

Boulware talks about the possibility of starting here:

Dabo Swinney
Head Coach
View Full Profile put it best during the spring when he said that Boulware was an “angry” football player.

“He’s angry,” Swinney said of Boulware. “He’s just angry. It’s going to be a blast watching him unleash his frustration of two years having to watch Stephone Anthony and bide his time a little bit. He’s a true, true competitor and a guy that takes great pride in his performance.”

“Ben’s a very prideful guy,” Venables said. “He doesn’t want to let anybody down. Nobody cares more than Ben. He’s very invested, very emotionally invested, physically invested. It’s a great quality to have but it’s also sometimes a bad quality to have because sometimes you can be too hard on yourself. You’ve got to be able to have a short memory, you got to lead and those kind of things but that’s been one of Ben’s strongest attributes, how much he cares. He’s an emotional player out there on the field and guys feed off of that.”

Boulware says he feels like he can be a major contributor as long as he’s consistent.

“There’s some days where you get tired and you don’t want to do it, but to perform at that level you’ve got to make sacrifices and you’ve got to be in that film room and in your (playbook) and texting coach (Venables) every day,” Boulware said. “That’s the main thing I’ve got to work on, just doing that day in and day out.”

A GOOD SEASON FOR BOULWARE WOULD BE… Steward had 73 tackles from that spot a year ago, but Spencer Shuey