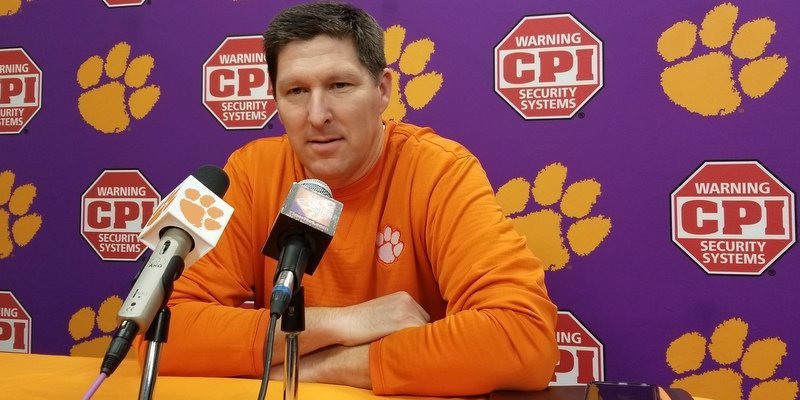 Brownell and the Tigers play Thursday at 2 pm

CLEMSON – Fourth-seeded Clemson heads into the 65th ACC Basketball Tournament this week in a different position than in past years. The Tigers are one of four teams that nabbed a double bye, and they’ve already locked up a berth in the NCAA Tournament.

That gives head coach Brownell a level of comfort heading into the tournament, which started Tuesday at the Barclays Center in Brooklyn.

“We have known for a while that we are an NCAA Tournament team and we've earned that. Our play in non-conference was really good. We really didn't have any bad outings, but we had a lot of performances that were high level,” Brownell said. Tuesday. “That set us up to where if we had some success in our league we could be in that position and we did. We got off to a great start and it's been nice to play the last week-and-a-half without that stress that probably 25 other teams are under right now.

“Our guys have earned it and we scheduled it appropriately and took care of business. Now it's about trying to get better. I think our team needs to get better if we are going to have any kind of significant success in these next two tournaments and I think we are pushing to do that. We are anxious to see how it works out.”

In a turnaround of fortune, Clemson will be among the teams hoping to avoid being an upset victim. In 64 previous ACC Tournaments, the Tigers have been one-and-done 47 times and are 19-64 all-time in tournament games. Clemson has advanced to the championship game of the ACC Tournament only twice – in 1962 when a 10-14 team upset N.C. State and No. 8 Duke before losing to Wake Forest, and again in 2008 when an unranked 22-8 team defeated Boston College and No. 7 Duke before losing to No. 1 North Carolina 86-81.

“There are things we need to get better at if we want to win at a high level,” Brownell said. “The levels of competition that we are getting ready to play in these next two tournaments are going to be high, and we have some areas where we need to improve. We are working hard on that as well as trying to prepare for whoever we are going to play, either Boston College or NC State.

“We haven't played either one of those teams in so long it will be different,” Brownell said. “We didn't play State with Markel Johnson and that's a significant addition for them, and it's a significant deletion for us because we had Donte Grantham for both games. A lot of times tournament basketball is shooting, and both of those teams are capable.”