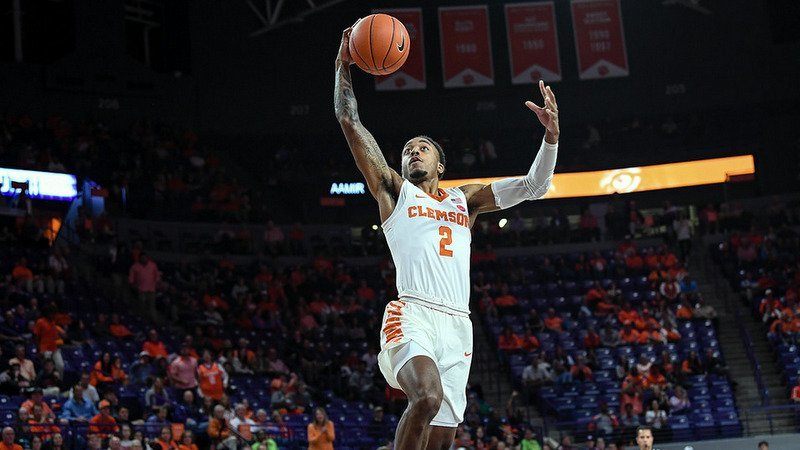 CLEMSON - The sluggish weather seemed to rub off on the Clemson basketball team in their matchup against Sam Houston State. Clemson won 74-59 but struggled to get the offense going for most of the night.

It was a rusty first half for the Tigers, who turned the ball over seven times and shot 45% from the field. After starting off the game shooting 60%, the Clemson offense cooled down. Sam Houston State came back after being down 21-13 with nine minutes left to take a quick 30-29 lead over the Tigers. Clemson ended the half with a three-pointer to take a 32-30 lead.

Marquise Reed highlighted a lackluster first half for Clemson, scoring 10 points and shooting 40% from the field.

The Tigers struggled from beyond the arc in the first half, only shooting 33%. They also shot 66% on free throws.

The defense for the home team was stellar as always. They held Sam Houston State to just 33% shooting and only 20% shooting on three-pointers.

The Tigers continued their struggles to start the second half but finally got things going with a 21-6 run to give themselves a 62-47 lead.

Shelton Mitchell turned the jets on in the second half, scoring 8 of his 13 points in the half to help lead the Tigers.

Reed was the leading scorer for the Tigers tonight with 26 points on 50% shooting. That pointed total gives him the 26th 20-point game of his career.

The offense woke up a little bit in the second half. Clemson ended the night shooting 53% overall from the field and 39% from three. They only turned the ball over three times in the second half for a total of ten for the game.

These early games are important for the Tigers to really find out who they can trust to win ball games. Despite getting a win tonight, Clemson did not look like a top 25 team against Sam Houston State.

Clemson returns to action next week in the Grand Cayman Islands Classic. The tournament will be held from Monday, Nov. 19 through Wednesday, Nov. 21 in Grand Cayman, Cayman Islands at the John Gray Gymnasium. Other participating programs are Boise State, Akron, Illinois State, Creighton, Georgia State, Georgia and St. Bonaventure.