Tickets were hard to come by for Tuesday's game

The atmosphere wasn’t as rowdy as I’ve seen, it was a private school after all, but you couldn’t ask for much more out of an early-season prep matchup than what we saw Tuesday night.

Zion Williamson, a 5-star prospect out of Spartanburg (SC) Spartanburg Day opened his senior season Tuesday night at Christ School in Arden, N.C., in front of a sellout crowd that started arriving 90 minutes before tipoff.

I finished up football interviews Tuesday in the indoor practice facility, waited for Nikki to get home and we made the trek to Arden to see two of the nation’s best prospects face off as Williamson’s team took on host Christ School and guard Jalen Lecque, the No. 19 player nationally for the 2019 class according to Rivals.

We made a quick stop in Hendersonville (Hannah Flanagan’s) and then it was on to Christ School, home of the Plumlee siblings of Duke basketball fame. The school had security guards at the gates asking if people already had tickets – the allotment of 3000 sold out in a matter of hours – and they were turning cars away. Roadside signs populated the drive in promoting the game.

Once inside Christ School’s beautiful gym, we made our way to the section reserved for media and coaches. Sitting behind us was South Carolina head coach Frank Martin and Gamecock assistants Perry Clark and Bruce Shingler. Writers from The State, The Post and Courier, Inside Carolina (a Scout site from North Carolina) and South Carolina’s 247 site were also in attendance. 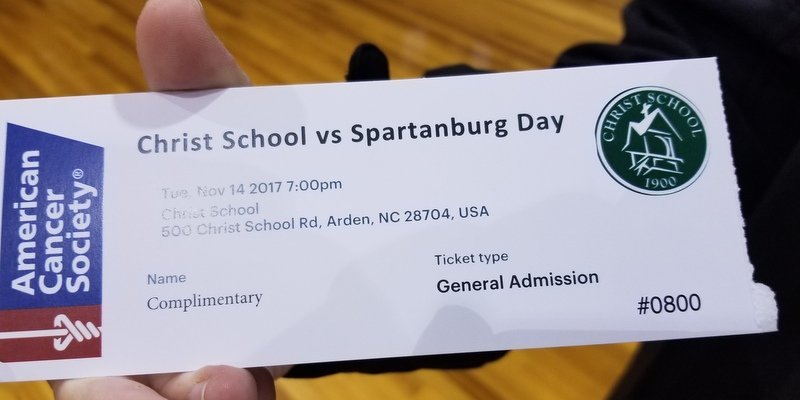 Tickets were hard to come by for Tuesday's game"

Sitting across from us was none other than Cameron Maybin, an outfielder for the newly-crowned World Series champion Houston Astros.

The student section – all clad in their sports coats and expensive loafers – cheered on every dunk during pregame. One Brooks Brothers-clad youth with Tommy Hilfiger shoes and his long hair swept over his brow, leaned out of the crowd a few inches and screamed, “We don’t want you at UNC, Zion!” His bravado earned him a wave of backslaps from his peers.

The crowd stayed rowdy throughout the game as Williamson’s 45 points and 15 boards weren’t enough in a 70-62 loss.

“I live for that type of atmosphere,” Williamson said. “Not a good performance (by me). My team didn’t get the win, it’s not a good performance for me. It’s been really fun to get the season started. This is my senior year, just cherishing every moment I can to play with some of my bros who we’ve become brothers over the four years.”

Many wondered if Williamson would sign with a school today – Wednesday is the deadline for the early signing period – but it appears he won’t. Kansas, Kentucky, Duke and North Carolina have hosted Williamson for official visits. News hit social media last week that Williamson might visit Clemson last weekend, but I didn’t put a lot of stock in those rumors (simply because those close to the staff didn’t know for sure).

So, could Clemson get the final visit? That’s all up in the air. He wasn’t allowed to talk recruiting during his postgame interview session in a crowded hallway outside the team locker room, so there will continue to be speculation.

From everything we are hearing, however, it appears that Clemson and Kentucky are the front-runners.

Will that continue to be the case as we move forward towards the final signing day in April? It will be interesting to see if he takes that final visit to Clemson. One observer told me last night that they think Williamson will tweet out his decision date a week in advance and hold a commitment ceremony at his school.

In the meantime, we’ll continue to closely monitor the situation and attend as many games as possible (he’s worth the price of admission). As we walked out of the almost-empty gym late last night, I asked the opposing coach about Williamson, and he shook his head and said, “He is incredible. He doesn’t have a lot of help, but he almost doesn’t need it. That was fun to watch.”

Welcome to the traveling road show that is Zion Williamson.