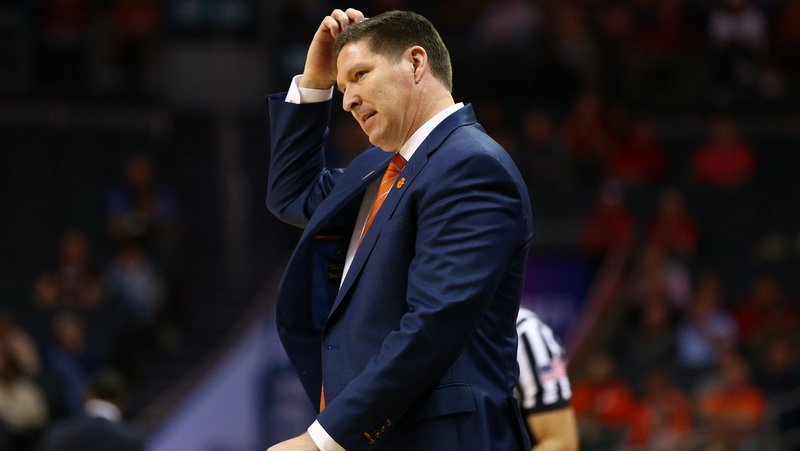 CLEMSON -- One streak ended and another continued Sunday evening in Littlejohn Coliseum -- neither boding well for Brad Brownell’s Tigers in a 67-54 loss to rival South Carolina.

Clemson’s three-game losing run extended to four this season, while their four-game winning run against the Gamecocks went to zero in an ugly affair.

Clemson turned it over a season-high 22 times and shot a season-low 28 percent from the field as the game slipped away in the second half.

The Gamecocks went on a 12-2 run to reach its largest lead with nearly 28 minutes in -- and they built on it from there.

An Al-Amir Dawes layup broke a lengthy scoreless run with just over 10 minutes left but he was answered by a Jair Bolden 3-pointer from deep and another Gamecocks trey on their next possession. South Carolina only attempted five shots from beyond the perimeter in the first half but they knocked down five treys in the final 20 minutes.

"I thought both teams made it really hard on the other to score," Clemson coach Brad Brownell said. "The second half they started to find a rhythm and we played very poorly in stretches. We had a hard time getting some of our players to slow down. They think the answer is to play faster with some of our younger players.

"And we're finding out that's not going to be the answer at this level."

Clemson (5-5) managed to only trail by two at the half despite making just seven of its first 26 shots.

South Carolina (7-4) held the edge most of the first 20 minutes but the Tigers crawled back into the game at the free throw line, hitting 7-of-8 attempts while their rivals only shot two free throws (1-2).

Clemson gained its first edge in over 12 minutes of game-time on a pair of Dawes free throws with 3:29 to go in the first period -- but a series of turnovers helped the Gamecocks jump back on top. Clemson was just two turnovers short of its season high at the half (16). Simms led Clemson at the break with 11 points but had to sit early after drawing his second foul. Those foul troubles continued after picking up his fourth foul with over 12 minutes to go.

"This was a very competitive, physical basketball game," Brownell said. "I told our team at halftime. Guys, we're not playing great. We have 16 turnovers but South Carolina has got 14. I said nobody's watching on TV anymore. They've turned the channel and that's over.

"But one of the teams is going to execute better in the second half and win and the other team is not. They did and we didn't."

Clemson returns to action at home with a 9 p.m. tip on Friday versus Jacksonville on ACC Network.