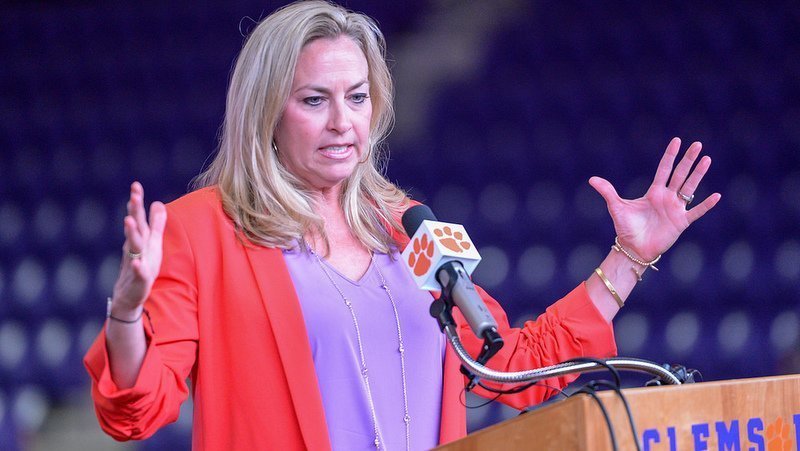 CLEMSON – Amanda Butler understands the power of the paw, an understanding that began when she was a teenager.

Butler was announced as the seventh women’s head basketball coach in Clemson Friday afternoon in Littlejohn Coliseum, and her upbeat press conference referenced her first interaction with what makes Clemson special. She said that when she was 16-years old she traveled from Tennessee to Clemson for a basketball camp.

“The very first time I came to Clemson was for a high school camp. The thing I remember most about that where the big orange paw prints on the street,” Butler said. “We took pictures of the paw last night at the airport last night and I feel the power of the paw. Back then, I felt this place was special and that feeling is so real and so attainable. I understand how unique and how special this opportunity is.

“At that time, I was amazed. I had never seen anything like that. I knew it was an indication that this place is special. It was neat.”

That feeling came back when she interviewed for the job.

“When I was choosing where to go next, I wanted to be well-led and I wanted to go somewhere where women's basketball was important. That is true here. I knew this was something I wanted to be a part of.”

Butler will attempt to turn around a Clemson program that has not had a winning record since the 2003-’04 season. She spent 10 seasons as the head coach at Florida and feels that she is prepared for the rebuilding process with the Tigers.

“I was given a tremendous opportunity at Florida,” Butler said. “When I began there the program was in a similar position as this one is in that it had not won quite as many games as it hoped to and it wanted to return to postseason. So I learned a lot of valuable lessons through that process.

“Some of those lessons I got it right and some of those lessons I get a chance to do it over and do it better a second time. I think coaching and competing in the SEC is great preparation for how good this league is as well, which is very, very unforgiving. At the same time, on the recruiting trail, you get a chance to go out and find people that want to be somewhere where they are going to be challenged every single day.”

Butler said she is excited about the chance to compete in the ACC.

“There is never going to be a day where you can say let’s go ahead and put a ‘W’ in the win column. That does not exist in the ACC. Those challenges and those opportunities I have experienced to a certain degree already and I will definitely have a lot of carry over in that regard. We are putting together a staff that will value people and develop people. Skills are a part of that but we also want to get them ready for life after they get that diploma.

Butler has amassed a 230-159 record in her 12 seasons as a head coach, including a 190-136 record at Florida where she led the Gators to four NCAA Tournament bids. She also produced six 20-win seasons in her 10 years in charge at Florida.

She said that winning at Clemson will require “protecting the yard.”

“We are going to guard our yard. We are going to have to keep the best players in this area at this university, something is not going to be easy but will be a part of our pursuit. It will be worth the energy we expend,” she said.