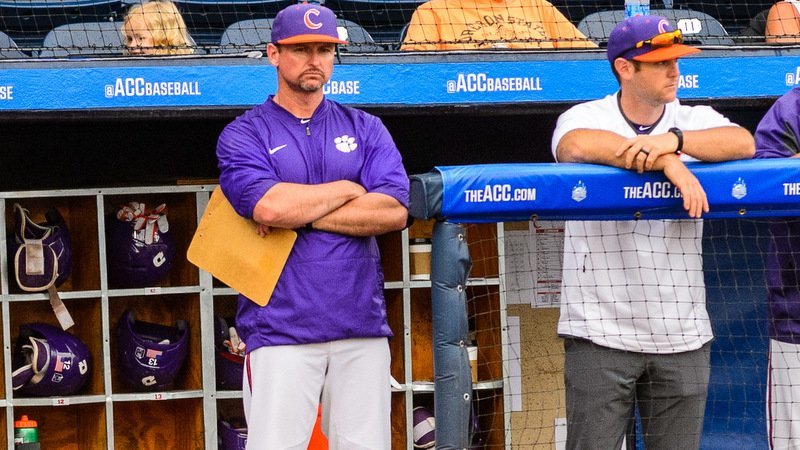 DURHAM, NC – Monte Lee was still visibly upset when he entered the postgame interview area following Clemson’s 5-4 loss to Florida St. in the semifinals of the ACC Tournament Saturday. Lee was gracious with his comments toward the Seminoles, but still on edge after being ejected in the eighth inning by home plate umpire David Savage.

Lee didn’t agree with Savage’s strike zone for much of the evening, and it was obvious Lee felt like Florida St. starter Cole Sands was getting calls that weren’t being called for his pitchers. After one tough pitch appeared to strike out a Seminole batter, only to be called a ball, Lee stepped out of the dugout and complained about the call.

Savage held up his hand and motioned Lee back into the dugout, and Lee spun around once before deciding to once again argue the call. At that point, Savage tossed Lee out of the game and Lee, livid, tossed his clipboard into the dugout before heading out to argue his point.

Pitching coach Andrew See managed the rest of the game for the Tigers, and Lee told the media he wouldn’t discuss the ejection.

“Well, obviously I can't comment on the situation, but at that point I was pretty fired up,” Lee told TigerNet. “That's about all I can say.”

Clemson got out of a bases loaded, nobody out jam after Lee’s ejection but the Tigers faltered in the ninth. However, Clemson starter Jake Higginbotham said the rare ejection of Lee was a sign that their head coach will take up for his players.

“You know, I thanked him after the game for going to battle for us,” Higginboth said. “Everyone in the dugout is competing, everyone on the field is competing. Sometimes emotions run high. It means a lot that he's going to go to battle for us, and he's got our backs and he's out there competing just as hard as we are.”

Higginbotham then went on to say the team takes on Lee’s fiery personality.

“We compete on every pitch, that's one of the staples of our program,” he said. “To see our head coach do it, I think it gave us a little energy jilt and helped Ryley get out of the inning. It was a big deal for our dugout at the time.”

Monte Lee got tossed for this bad call pic.twitter.com/Kz9GgJDKFf