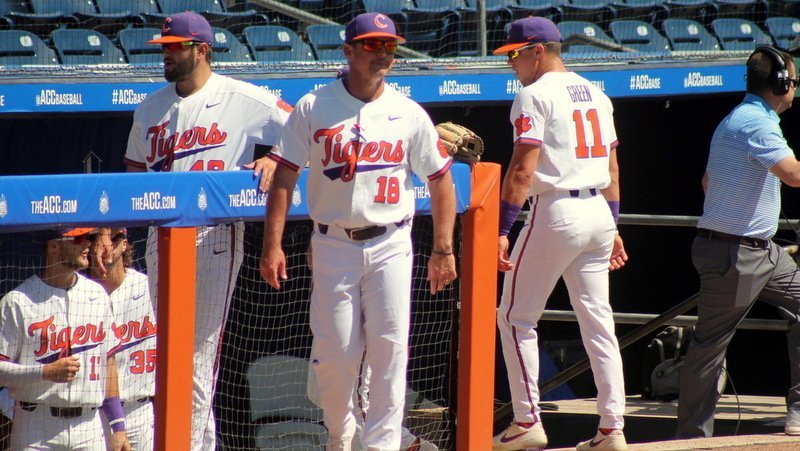 Lee thinks his pitching staff has potential heading into the season.

CLEMSON - For Clemson baseball head coach Monte Lee and his team, they did not end their 2019 season the way that they had hoped to. The Tigers once again exited the NCAA tournament in the regional round, this time in Oxford. In the three seasons prior to 2019, Lee led the Tigers to host the regional round in Clemson but fell short of making it to the Super Regionals all three years.

But 2020 calls for a new opportunity for the Clemson Tigers, as they begin the road to Omaha.

“It’s been a very motivated group. It was a very humbling experience for all of us. This game will teach you an awful lot if you allow it to” Lee said. “It was a tough second half of the year and tough summer for all of us.”

Last year it seemed as if the Tigers struggled to find a solidified third starter for their weekend matchups. That struggle gave Clemson issues, especially in big games such as South Carolina.

This year, Lee and his staff believe they have several options for that third starter role.

“I will be quite honest with you, I am going to let it all play out,” Lee said. “In my mind, I have about eight guys that I feel like are in contention based on what they did in the fall.”

The Clemson pitching staff picked up a lot of good arms since last season and they also return a couple of pitchers from injuries. Pitching coach Andrew See and Lee will have their fair share of options when it comes to who is on the mound.

“Well, I have never heard a head coach say he has too much pitching. We always want to have quality depth. There is some quality stuff in this pitching staff,” Lee said. “Carter Raffield is coming back off surgery. He has been dominant. Spencer Strider is in good shape and looks ready to go.”

In order for the Tigers to make a deep postseason run, Lee knows changes will need to come. His staff and team spent the offseason trying to figure out what adjustments they need to make in order to be more successful down the stretch of the season.

“The fall was all focused-on development. Just trying to develop the individual and trying to find a strength in each individual,” Lee said. “Trying to build our team culture more. Spending a lot more on team culture and that has gone significantly well. This is a every selfless group.”

In the past, the Tigers have had proven players in the lineup such as Seth Beer or Logan Davidson. This group is not as proven at their position and has a lot to show.

“It is a very unproven group. Especially on the position players side. We’ve got some young guys. We’ve only got two guys who have played one full season as a starter,” Lee said.

Since Lee has taken over, his Clemson teams have hit plenty of home runs, especially in middle of the lineup. But they struggled at the bottom of their line up to get timely hits. This year, the Tiger offense has the chance to be more balance than it has been in the past.

“We don’t have that proven 3-4-5 right now,” Lee said. “I think we have a better chance to spread our lineup out and put together quality at-bats.”

Lee and the Tigers take the field at Doug Kingsmore Stadium for the first time on Valentine’s Day weekend, as they host the Liberty Flames to kick off the 2020 season. Friday’s matchup starts at 4 p.m. while both Saturday and Sunday’s matchups begin at 1 p.m.