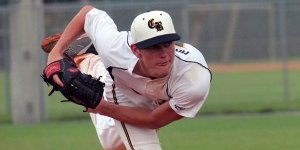 Mitchell can play right away

Miller, considered one of the nation's top prospects, will have a chance to come in and play right away and compete for a spot in the weekend rotation.

When I committed, Coach (Butch) Thompson and Coach (Nick) Mingione were there and then they left. Those were the main two reasons I committed,” Miller told TigerNet. “When Coach Thompson left this year, I was going to leave and decommit, but I decided to wait and see who the new guy was and I ended up liking Coach (Wes) Johnson and Coach Mingione and then when they left I didn't really have a relationship with anybody there anymore, so I didn't know if I still wanted to go there. I filed for my release hoping that they would give it to me and they did.”

Clemson isn’t new to Miller as it has been a lifelong dream for him to don a Tiger uniform and attend Clemson University.

“When I was in the seventh grade, my sister took a tour up there, and I went with her, and I fell in love with it. I just fell in love with Clemson, and I told my mom I'm going to Clemson,” Miller said. “I bought Clemson hats and a C.J. Spiller jersey. I went on a visit my freshman year, and I didn't get an offer, but Mississippi St. gave me an offer that I couldn't really turn down and I really liked Mississippi State, so I went ahead and committed.”

When the opportunity to transfer materialized, Miller said the first person he fielded calls from was Lee, leading to a long visit and the commitment on Monday

“When I got released, Clemson was the first team to call me,” he said. “I got other calls from ACC schools, but Clemson was the first school I was going to give a chance to. Coach Lee, he's right up my alley. He's just a southern, country boy who likes to hunt and fish. We clicked really well today when we were talking. I got there at 10 o'clock, and I didn't leave Clemson until six.”

Miller is very familiar with his future pitching coach – Andrew See – as well as his coaching style.

“Coach See actually played one year at Georgia with my high school pitching coach, so he's a cool guy,” he said. “From when I met him today and from talking to him over the last week or so, he's a really cool guy. I think he's going to be good for me. I think he has a lot of the same stuff we did in high school; he does a lot of that stuff at Clemson.”

Miller has the makeup of a weekend starter with his 5-pitch repertoire.

“He (Lee) told me that if I come in and work and keep progressing like I'm progressing, he said I have a chance to be a Saturday or Sunday starter,” he said. “I have two different fastballs - a four-seam fastball and a two-seam fastball. I have a circle change, a curveball, and a cutter. I'm a power guy, I guess. I topped out at 94 mph this year. I sit 90-92, touching 93 and I topped out at 94. I like to work quick. I'm an up-tempo guy. Batters always call time to slow me down. When I get on the mound, I just try to keep my team in the game by competing.”