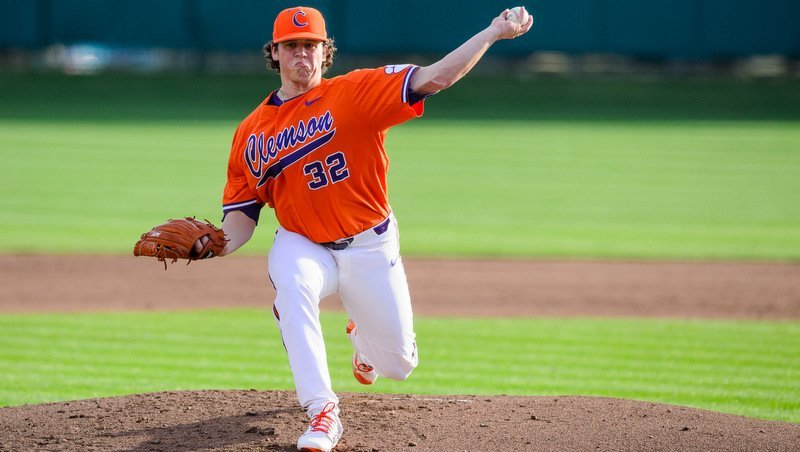 Jacob Hennessy fell to 1-1 on the season

CLEMSON – A lack of offensive production and too many errors cost Clemson in game one of a three-game series with N.C. State

"N.C. State deserves a lot of credit tonight. I thought their starting pitcher Michael Bienlien did an outstanding job, pounded the strike zone, only free pass, only one walk," Lee said after the game. "There were a lot of ground balls. He had a lot of sink on his fastball and did a good job of locating his fastball. I thought the key to the game for them was that their bullpen was outstanding past him. Bienlein did an outstanding job of getting ground balls and pitching to contact, then Coach Avent did a really good job of matching up and making the right calls out of the bullpen in the right spots. Their bullpen was outstanding for them."

Clemson, on the other hand, didn't do itself any favors with the costly errors on defense.

Jacob Hennessy fell to 1-1 on the season"

"We played sloppy tonight. We made five errors, uncharacteristic of us. I think we had 11 free 90s total between walks and errors," Lee said. "We didn't play our best baseball game but it was still a four-run game. It was a three-run game going into the eighth. We had a couple of opportunities, not very many... Overall, they were the better team tonight. They played a better baseball game than we did. They deserved to win."

After giving up a home run in the first, Clemson starter Jacob Hennessy (1-1) was sharp, striking out seven batters, but a pair of throwing errors gave State all the room they needed as the sophomore lefty dropped his first game of the season.

N.C. State center fielder Brett Kinneman came into the series hitting a robust .408, and it didnt'take long for him to show Clemson why.

Kinneman belted the first pitch he saw three rows deep in the right-field bleachers – his 11th home run of the season – to give the Wolfpack a 1-0 lead in the first inning.

Hennessy retired seven batters in a row before running into trouble in the fifth inning.

Brock Deatherage led off the fifth inning with a five-pitch walk and J.T. Jarrett bunted the ball back to the pitcher, but the throw sailed into short right field to put runners on the corners with nobody out. A fly ball to center plated State’s first run of the inning. Jarrett advanced to second on a sharply hit single through the right side by Kinneman and came around to score on a single up the middle to extend the Wolfpack’s lead to 3-0.

After an error and a walk in the sixth inning, Hennesy’s day was done, giving way to Ryan Miller.

Hennessy pitched 5 1/3 innings and gave up three runs – all earned – on six hits and three walks. He struck out seven.

N.C. State added a run in the eighth off of reliever Owen Griffith after he gave up a walk and back-to-back singles.

Game two of the series will be Saturday at 4 p.m. with Clemson righty Brooks Crawford squaring off against State lefty Brian Bowen. The series finale is scheduled for 1 p.m. on Sunday.

Clemson vs NCSU Box Score
Get the latest Clemson gear right here!
Comment on this story