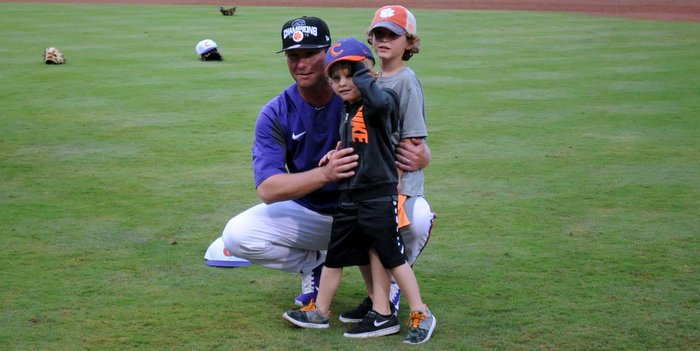 LeCroy poses with his family after Sunday's ACC Championship

CLEMSON – The flight home following Clemson’s loss to Pepperdine in the NCAA Regionals at Cal-Fullerton last season was long and filled with anxiety for assistant baseball coach Bradley LeCroy.

The next two weeks were even worse as rumors swirled about the future of former head coach Jack Leggett and the process of finding a new leader for the program. LeCroy, who played at Clemson from 1997-2000, considers Clemson home, and he thought he was home to stay when Leggett hired him back in 2011.

Then it all changed.

“It was tough. Obviously, this program means a lot to me, not just as my job. I played here,” LeCroy told TigerNet this week. “This is where I went to school. My wife went to school here. We are raising our two young boys here. The thing about it is, in that transition phase, when Coach Leggett was relieved of his duties, however long that was, I tell people over and over that those two weeks or however long I wouldn't wish those two weeks on my worst enemy. It was tough. The program was just in such a transition. But then with Monte (Lee) coming in and me being able to stay and continue to do what I do for this program- I'm very lucky, very blessed. I appreciate Monte giving me the opportunity to stay in this program. So far it has worked out.”

LeCroy finally found some relief when he learned Lee’s name was in the mix at Clemson.

“Well, fortunately for me Monte and I have known each other for a long time, 10 or 15 years,” LeCroy said. “He was at South Carolina and I was here as an assistant and we would work the camps together, things like that. Obviously, I respected him for what he had done in his career and I think he respected me obviously to keep me on staff. We communicated throughout the process. Obviously, I knew he was a name that was in the mix. We communicated through the phone and he asked me if I would be willing to stay and I said yes if it's the right situation I would love to stay here at Clemson. I had some other opportunities outside of Clemson but this is my home, this is my place.”

However, LeCroy played for Leggett and coached under Leggett, and he wanted to make sure that his former boss was okay with his decision to coach for Lee.

“It was my own decision ultimately but as much as Coach Leggett had done for my family and me during my playing and coaching career obviously I talked to him about it. He's a great man,” LeCroy said. “He was 100 percent supportive with whatever I wanted to do. If that was staying here at Clemson with Coach Lee then he was 100 percent supportive because this profession, it's tough. It's tough on families and I've got a great wife and two small kids and this is where we want to raise our kids. We want them to be raised and grow up and Clemson Tigers and so far it has worked out for us.”

LeCroy has now spent a year with Lee and his level of respect for his new boss is off the charts.

“It has been great. You know one thing is he is just a great leader of young men and he gets the best out of them. He is a great guy to work for,” he said. “We have staff meetings and I've told other people outside and I told him, not to take this a bad way but I don't feel like I work for Monte - I feel like I work with him. I was a little hesitant saying that in front of him but you know that's what he wants. He wants us to work together. Obviously, he is the head coach. He is the boss. But we have a great working relationship. It has been fantastic. What we do in the office recruiting wise, what we do here on the field, it's been great with him and Coach (Andrew) See and what we've accomplished so far has been awesome.”