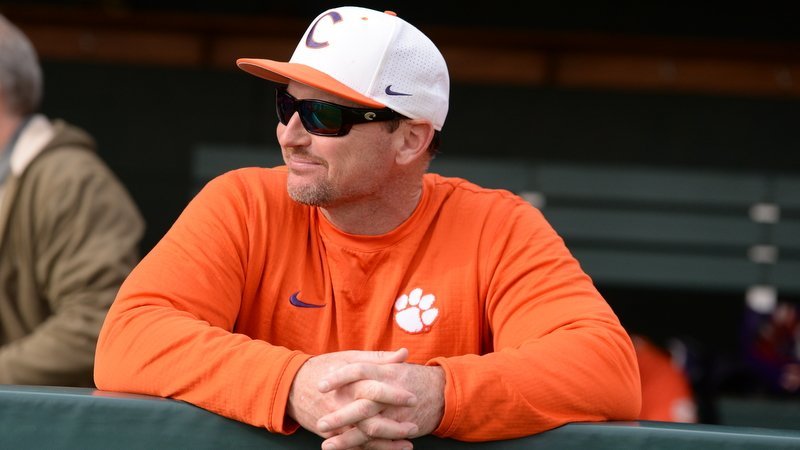 Clemson closes out the regular season portion with a three-game series at Pitt that starts this evening, and there is plenty on the line this weekend for the Tigers.

Both division titles hang in the balance as ACC teams enter the final week of the regular season. Clemson (19-8 in ACC play) holds a one-game lead over No. 4 NC State (18-9) in the Atlantic Division. Clemson took two out of three from Austin Peay in non-conference play last weekend, while the Wolfpack engineered a three-game sweep of Wake Forest.

No. 8 North Carolina (19-8) saw its Coastal Division lead over No. 9 Duke (17-9) trimmed to 1.5 games after the Blue Devils took two of three from the visiting Tar Heels. This weekend series’ that feature the teams in contention for division titles include Clemson at Pitt, NC State at Florida State, Virginia Tech at North Carolina, and Duke at Georgia Tech.

The division winners will claim the top two seeds for the 12-team ACC Baseball Championship, scheduled for May 22-27 at Durham Bulls Atlantic Park. Clemson, North Carolina, NC State, Duke, Florida State, Louisville, Miami, Notre Dame and Georgia Tech have clinched nine of the tournament berths, but the final three spots are still to be decided.

The Tigers have a chance to be the No. 1 seed heading to Durham but need a little help. The advantages to having the top seed are this: If all the teams in the pod finish with a 1-1 record, the top seed advances; the top seed also chooses which day to begin play; and, the top seed will face off in pool play against the No. 8 and No. 12 seeds.

The No. 2 seed plays the No. 7 and No. 11 seeds, while the No. 3 seed plays No. 6 and No. 10. The format is round-robin play for four groups of three teams. The winner of each group advances to the semifinals. The final two teams meet for the championship.

The Tigers are in contention for the top seed and go into the weekend tied with UNC for the top spot and a game ahead of NC State - two teams which would have the tiebreaker on Clemson.

With the tiebreaker over N.C. State (18-9) and Clemson (19-8) and a 1.5-game lead over Duke (17-9), UNC has a lot of ways to be the No. 1 seed in the ACC championship. The easiest would be to sweep Virginia Tech. With two wins over Virginia Tech, UNC would clinch the Coastal Division.

A three-game sweep of N.C. State at the end of April gave the Tar Heels the tiebreaker over the Wolfpack and Tigers. UNC and Clemson didn’t play during the regular season, so the tiebreak is based on “best” win (which is based on the ACC standings). UNC went 3-0 against State, while Clemson went 0-3.

If UNC goes 2-1 against Virginia Tech, Clemson could earn the No. 1 seed and clinch the ACC Atlantic by sweeping Pitt. The Tigers go into the weekend a game behind UNC (because of the tiebreaker) for the No. 1 seed. Clemson is a game ahead of NC State in the standings. If they win two of three at Pitt and NC State sweeps Florida St., the Wolfpack would in the division by virtue of the Pack’s three-game sweep at Clemson in March. In other words, Clemson needs to keep the one-game lead over the Wolfpack coming out of the weekend.