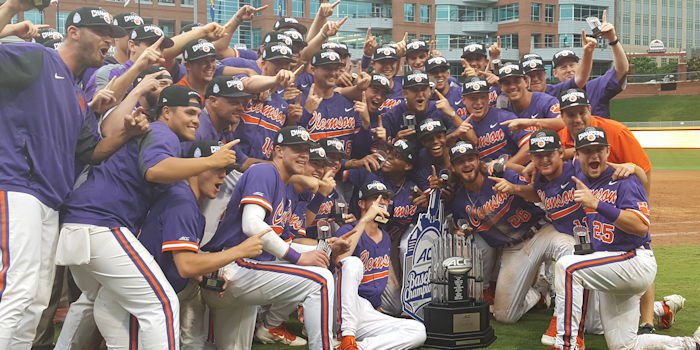 Chase Pinder and Chris Okey each drove in four runs for the Tigers, while Alex Bostic picked up his fourth win with four stellar, scoreless innings of relief.

The ACC Championship marks the first time since 1988-89 that Clemson has won an ACC title in both football and baseball. The title is the 10th tournament title for the Tigers, and just the second since 1994. The title game appearance was Clemson’s first since 2006, the last time the Tigers won the ACC tourney.

Clemson completed pool play in Pool B a perfect 3-0 after a 5-4 win over Wake Forest Saturday. Florida State swept Pool A, finishing with a walk-off 5-4 win against top-seeded Miami Saturday.

The 18 runs were the most scored by Clemson in a tournament game since scoring 16 against Georgia Tech in 2006. The record of 24 runs was established in the title game against Tech in 1991. ACC Champions! Tigers smash FSU to take first title since 2006

"A long day, a long day for everybody involved, but just want to give -- I want to give Florida State a lot of credit, first and foremost, to be down by that many runs early in a ballgame and to plug away and keep competing the way that they did; and to essentially, there right at the end, they made it a ballgame, and it just shows you a lot about Mike Martin, his coaching staff and his players, how tough they are, how good of a competitive ballclub they are to stay in that ballgame," head coach Monte Lee said. "But look at our guys. What an unbelievable job. We scored a bunch of runs early in the ballgame. That momentum started there in the first inning. Okey hit the -- crushed a ball, and next thing you know, it was like putting gasoline on a fire in our dugout. Our guys were fired up and ready to go, and we competed about as good as we could.

"Brooks gave us everything that he had. He's been a guy that as a true freshman is going to be really good for us. Been a reliever for us. We asked him to start in the biggest game of the year for us and he did a good job. Bostic did an unbelievable job. Great to see Alex Bostic who has been up-and-down for us this year have the kind of outing that he had for us today. And Pat Krall found a way to do what Pat Krall does. So just overall, just so proud of my players, how we competed. This is a selfless group of men that show up every single day and compete pitch-by-pitch, inning-by-inning, game-by-game, and I couldn't be prouder of them. So just really proud of my guys."

The Tigers got it started in the first, most of it thanks to FSU’s shaky defense. Pinder reached on an error by the shortstop to start the game, and it unraveled for the Seminoles from there. Eli White struck out looking for the first out, but Seth Beer walked to put runners at first and second. Okey then doubled off the wall in left to score Pinder, and the left fielders throw missed the cutoff man, allowing Beer to score.

The catcher grabbed the errant throw and tried to nab Okey – who was still running – and his throw sailed into right field, and Okey cruised in easily for the score as the Tigers grabbed a 3-0 lead on three Seminole errors.

Florida St. got one of those runs back in the bottom of the inning, with starter Brooks Crawford walking two and giving up a single that led to a sacrifice fly by Cal Raleigh to make it 3-1.

Mike Triller, who was named tournament MVP, reached on a muffed throw from second to start the second inning, and FSU starter Ed Voyles hit Chris Williams in the back of the head with a pitch. Voyles then walked Jordan Greene on four pitches to load the bases, and Voyles was taken out in favor of his brother, Jim Voyles.

Pinder greeted the second Voyles with a sacrifice fly to center to score Triller for a 4-1 lead, and White followed with a RBI single to left to score Williams for the 5-1 lead. Beer walked to load the bases, and Okey bounced into a fielder’s choice that scored Greene to make it 6-1. Okey stole second, and Reed Rohlman rifled a single into right field to score both Okey and Beer for an 8-1 Clemson lead.

Ed Voyles went one inning, and gave up six runs, but just one of those runs was earned.

The Tigers opened it up in the third. Wilson walked on a full count to open the frame, and Triller mashed a single to center to advance Wilson to second. Williams walked – on another full count – to load the bases for Greene. Greene struck out for the first out, but Pinder lined a three-run triple to right-center, clearing the bases for an 11-1 Clemson lead. White followed with a ringing double down the left field line that scored Pinder for a 12-1 lead, and the second Voyles was done for the day.

Mike Compton relieved Voyles, and Beer greeted Compton with a slashing single to center that scored White for a 13-1 Tiger lead. Jim Voyles finished with 1 1/3 innings pitched, and he gave up seven runs on five hits. All seven runs were earned.

With Beer at first, play was stopped for the second time on the day, and it lasted two hours and 41 minutes. Once play resumed, Okey grounded into a fielder’s choice that forced Beer and Rohlman struck out looking to end the inning. 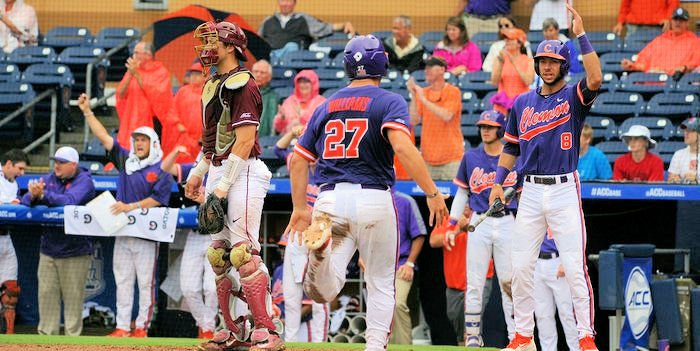 Crawford returned to the mound and held the ‘Noles scoreless in the bottom of the third, and the Tigers continued to pour it on in the fourth. Wilson reached on a single to start the frame, and Triller doubled off the wall in left to put runners at second and third. Williams delivered a two-run double down the left field for a 15-1 lead, and White followed with an RBI double of his own two batters later to make it 16-1.

Beer walked on four pitches, and Okey hit a blast to left-center that scored two runs for an 18-1 Clemson lead.

Crawford came back out for the fourth and ran into immediate trouble as FSU hit a double, a single and two homers to cut the lead to 18-5. Crawford was replaced by Alex Bostic. Bostic gave up a single and a walk but escaped without further damage, and Clemson led 18-5 after four innings.

Bostic pitched through the seventh inning, giving up three walks and one hit while striking out eight.

Ryley Gilliam came on to pitch the eighth and gave up an RBI double, and then loaded the bases with a walk. He was replaced by Alex Schnell. Schnell promptly walked in a run to make it 18-7, and an RBI single made it 18-9 as Schnell struggled to throw strikes. An RBI grounder got the first out, but it was 18-10, and the Clemson faithful in the stadium started getting restless. A double over Beer's head made it 18-11, and Schnell was replaced by Paul Campbell.

Campbell promptly gave up a long, two-run homer to Dylan Busby that made it 18-13. Campbell got a strikeout to end the inning.

It was at that point that both teams were removed from the field because of lightning and the ACC title game went into it's third weather delay.

Clemson went quietly in the top of the ninth, and Pat Krall came in to shut down the Noles.

Clemson will learn if it’s a regional host Sunday evening. The 16 regional hosts will be announced starting at 8:30 p.m. on the NCAA Baseball Social Media Channels @NCAACWS and https://www.facebook.com/NCAACWS.