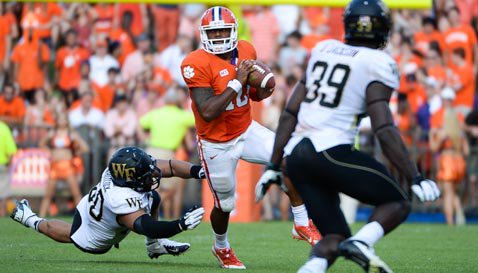 The opposing head coaches flew down to south Florida just for the day, and the press conference was held in Hollywood, Fla., at the Seminole Hard Rock Hotel. The coaches will bring their teams back in a little over two weeks to begin game-week preparations. The Orange Bowl is Jan. 3 at Sun Life Stadium.

Clemson (10-2) was an at-large pick for the bowl, while Ohio St. (12-1) was the replacement pick for Florida St., the ACC champion. The Seminoles will be playing for the national championship.

Swinney’s Tigers are playing in the bowl game for the second time in three seasons, and he said it was an honor to represent his conference.

“It’s an honor to be here and represent the ACC. It’s really a treat for our players and our staff,” Swinney said. “It’s a great reward for another excellent season. I have great respect for Coach Meyer and the Buckeyes, and I don’t have any doubt this will be a great matchup.”

Clemson lost the 2012 Orange Bowl to West Virginia, but the Tigers’ previous trip was back in 1982, when Clemson knocked off Nebraska 22-15 and claimed the school’s only national championship.

“For us, the Orange Bowl has a rich meaning for our tradition,” Swinney said. “We hadn’t been here for 31 years, and now to be here twice in three years is a great accomplishment for our program and our guys. We are looking forward to spending the week here.”

Meyer led the Buckeyes to a 12-1 record this year, losing to Michigan State 34-24 on Saturday night in the Big Ten championship game. Meyer had been 24-0 in Columbus before that loss – they were ineligible for a bowl game last season - and Meyer said playing in a BCS bowl game was a worthy reward, even though the team wanted the chance to play for the national title.

“It's been a two-year magical run," Meyer said. "We experienced some incredible success over the last two years and we're going to try and get our 13th win. I can tell you this, every team in America wakes up in August and wants to play in a BCS Bowl game and we're one of the few teams that get to do that so we're honored to be here."

Meyer is the first coach to lead three different teams - Utah, Florida and Ohio State - to a BCS Bowl game.

Clemson won the previous meeting between the schools, 17-15 in the 1978 Gator Bowl. In that game, Ohio State coach Woody Hayes punched Clemson nose guard Charlie Bauman after he intercepted a late pass. Hayes was fired a day later.

“Ohio State hasn't been here in a long time and we have a lot of fans in South Florida,” Meyer said. “I think Clemson and my good friend Dabo Swinney will be a great opponent and it should be an exciting game."

"When you can count on one finger how many losses you have as a star quarterback it's pretty good," Swinney said about Miller. "He's a thousand yard rusher and I think he missed three games this year."

I've been watching Tajh Boyd play for many years now and I think he's transitioned from a good player to a great player," Meyer said. "He's a dynamic thrower. And as with most excellent quarterbacks his surrounding cast might be the best in America."