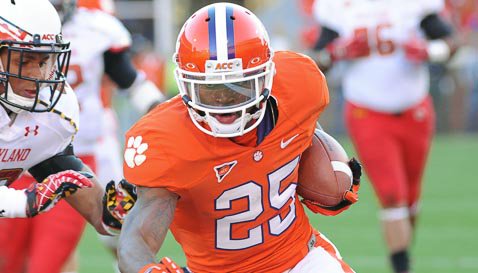 Andre Ellington
Running Back
#23 5-10, 195
Moncks Corner, SC
View Full Profile . Others simply haven’t put it all together on the collegiate level and had the kind of season they want.

Now is that time, and today we take a look at the offense.

*RB Rod McDowell - McDowell more than likely leaves fall camp as the starting running back, something he has longed for since he first set foot on the Clemson campus. However, it’s hard to break into the starting rotation when you have to sit behind three NFL-caliber players. Now, it’s McDowell’s time to shine.

McDowell rushed for 450 yards on 83 carries last season as Ellington’s backup and has averaged 5.2 yards per carry over his Clemson career. The Tigers will need that kind of production from their most seasoned runner if the season is to go as planned. Other than the secondary, which we covered in the defensive story, this position might be the biggest question mark heading into the season.

I spoke with McDowell several times during the spring, and he assured me that he is ready for the challenge and has several goals he has for the season, including gaining 2000 yards in total offense. That might be a bit of a stretch, but you have to like his confidence.

Another good note – I had an NFL scout tell me late last season that McDowell actually does a better job of reading his blocks and using his blockers more wisely than Ellington.

Isaiah Battle
So. Offensive Tackle
#79 6-6, 280
St. George, VA
View Full Profile - The Clemson coaches WANT Battle to win the starting job at left tackle. They NEED him to win the starting job. However, he followed up a great effort [in relief] against LSU in the Chick-fil-A Bowl with a so-so effort this spring, and came out of the spring as a backup.

Let’s face it – Battle has the body type with his height and long arms to be a dominant left tackle, the kind of player that stops opposing defensive ends.

Of course, the biggest reason this team needs Battle to be the guy at left tackle is because it rounds out the rest of the offensive line – versatile Brandon Thomas

Brandon Thomas
RS Sr. Offensive Line
#63 6-3, 305
Spartanburg, SC
View Full Profile can step in at left guard (a more natural position for him) or elsewhere on the line. If Thomas has to stay at left tackle, the coaches might be forced to move Ryan Norton

Ryan Norton
RS So. Offensive Line
#58 6-3, 270
Mauldin, SC
View Full Profile to one of the guard spots if the production out of the left guard spot doesn’t improve.

Charone Peake
Jr. Wide Receiver
#19 6-3, 200
Moore, SC
View Full Profile -How do you replace Nuk Hopkins? With the three-headed monster of Watkins, Bryant and Peake with a little Adam Humphries

Watkins’ season wasn’t terrible a year ago, but it wasn’t the numbers he, the coaches or the fans were expecting after a stunning freshman campaign. The word is that he and quarterback Tajh Boyd

Bryant caught 10 passes last season, but for a whopping 305 yards. That’s right, the 6-5 speedster averaged 30 yards per catch. This year, he will be counted on to fully develop his game and become more than just a downfield threat. If he becomes a complete player, watch out.

Peake was actually rated higher than Watkins by many services coming out of high school, and it’s taken him time to find his niche because he has had to play behind both Watkins and Hopkins. He had 25 receptions for 172 yards last season, but showed good hands and ability to make catches in traffic.

And finally, I know that some on here will say that someone from the tight end spots needs to step up, and I totally agree. But we really don't know a starter at this point, and the entire group has limited snaps among them. We will wait later in to fall camp before revisiting the tight end spot.