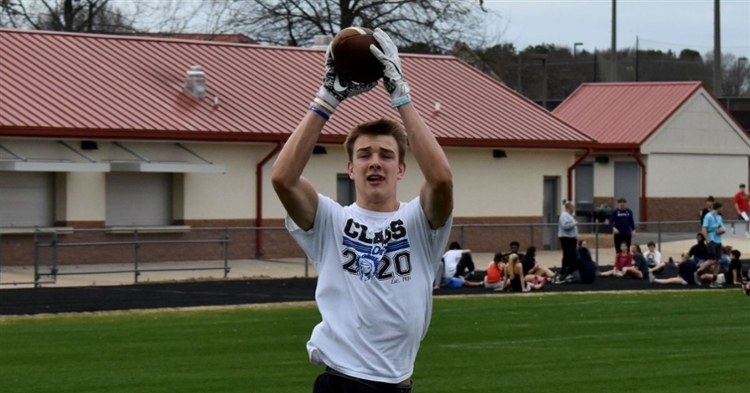 Johnson caught 60 passes as a sophomore.

Jake Johnson is a 6-6, 220-pound tight end from Watkinsville (GA) Oconee County. Johnson reported a Clemson offer on June 2nd, learning of the offer from Clemson’s tight ends coach Danny Pearman. Many of the top programs in the country are hoping to land Johnson, with Clemson joining the likes of Alabama, Florida, Georgia, and LSU as teams to offer Johnson a scholarship.

Johnson has mainly been in contact with Pearman during his recruitment. Johnson visited Clemson in March where he had the chance to meet Dabo Swinney.

“I have been talking to Coach Pearman for a while this spring,” Johnson told TigerNet. “I went to a Clemson practice and position meetings around Junior Day in March. I was able to spend some time with Coach Swinney also. He has a great office! I was able to tour the facility too.”

Johnson is the son of former NFL quarterback, Brad Johnson. Johnson’s brother, Max, is also currently a quarterback at LSU. Johnson had the chance to visit Clemson during his brother’s recruitment, and Clemson is definitely a school he can see himself playing for.

“I actually visited Clemson with my brother a few years ago, so this was my second time being on campus,” he said. “I was very thankful for the offer. There are schools that I am really interested in and see myself playing at one day. Obviously, Clemson is one of those schools.”

While learning about Clemson during his recruitment, Pearman and Swinney have talked to Johnson about everything that Clemson has to offer.

“Coach Pearman said I’m a good fit for their system,” Johnson said. “I’m a tight end that can also play in the slot or at receiver to get potential mismatch opportunities. Coach Pearman and Coach Swinney have stressed to me the importance of the Clemson education as much as football. Right now I’m just spending a lot of time in the weight room and looking forward to getting back to football again.”

Going into his junior season, Johnson is concentrating on finding the best school and building on relationships with coaches recruiting him.

“With me just beginning my junior year, I am in no hurry to commit anywhere,” he said. “I just want to keep developing the relationships that I’ve already made. I’m looking for a school that my skill set can be used and where I can reach my full potential and be developed over my college career.”

At 6-6, Johnson is a matchup nightmare for teams to defend. What does Johnson feel are his strengths on the field?

“Ability to run routes and catch the ball in traffic with my size,” Johnson said.

As a sophomore, Johnson pulled in 60 catches and 14 touchdowns on his way to being named First Team All-State. Johnson displays soft hands and the ability to adjust to difficult throws. Johnson uses his 6-6 frame frequently on film to go above defenders and high point balls. His route running is extremely impressive, especially when lining up in the boundary and beating cornerbacks with size and speed.

In the 247Sports rankings for the 2022 class, Johnson is ranked as the No. 7 tight end in the country and the No. 17 player in the state of Georgia.

Very thankful and excited to receive an offer from Clemson! #GoTigers #DeathValley pic.twitter.com/CsiSNE2Ol5