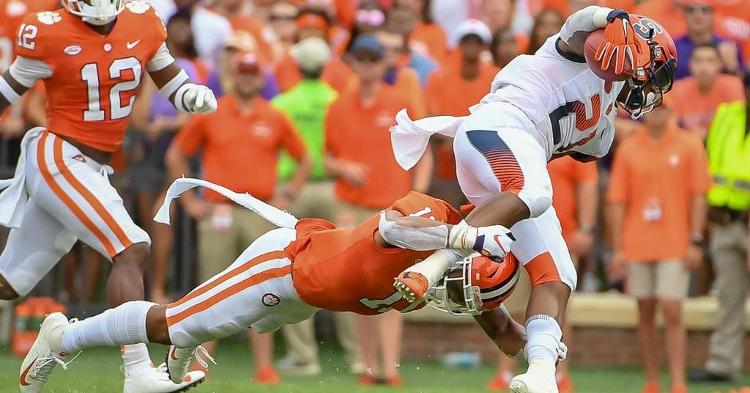 Brent Venables is looking for runners and hitters, like Isaiah Simmons

CLEMSON – Clemson’s kickoff coverage teams were manned by a mix of older and younger players last season, but there will be an infusion of youth this season. What is Brent Venables looking for on that unit? Hitters and runners. Heat-seeking missiles. Puppies that bite.

The Tigers’ recorded 81 touchbacks last season out of 117 kickoffs with opponents averaging just 20.53 yards per return on 32 returnable kicks (some were fair caught). To keep up that level of play, Venables knows he will have to rely on redshirt freshmen to fill in the gaps.

“We'll see. In a perfect world if you're going to play some young guys, guys like Mike Jones and Baylon Spector and Jake Venables and Vonta Bentley or Keith Maguire or Kane Patterson or Greg Williams,” Venables said. “I'm just using backers. Reagan Upshaw, if he's healthy. That group of guys is a group of guys that if I defined them in something, they're runners and hitters `and they're all smart guys.

“So we need them to step up, too, and then you manage that. You still want your best players on teams and most importantly units whether to punt and kick-off. And you rotate guys in accordingly, but hopefully, those guys are ready to go take jobs.”

Venables said some of his best players started out as special teams phenoms.

“That's why we played James Skalski as a true freshman. And that's why we play Ben Boulware as a true freshman because they're just runners and hitters. They're heat-seeking missiles,” he said. “They can find the football. You don't have to coach them. They just know where the ball is. And when they get there, they blow people up. Some guys get there and they start choking down and turning their face and bracing themselves. And that's okay, too. They're just not quite ready yet. And if a dog is going to bite to usually bites as a puppy and for some guys, that's just very natural for them.

"So we'll see with this new group of guys. We're going to need those guys. I think linebackers and the secondary will make up the largest part of your special teams units. In order for us to play at a high level, particularly at positions that maybe don't have as much depth and some of those fringe guys gotta do a good job of being able to contribute at a high level on our special teams unit. So it again is a strength, not just we want to go out there and just survive and hope somebody didn't score a touchdown or block a kick. You want to go out and have it be a position of strength for you."