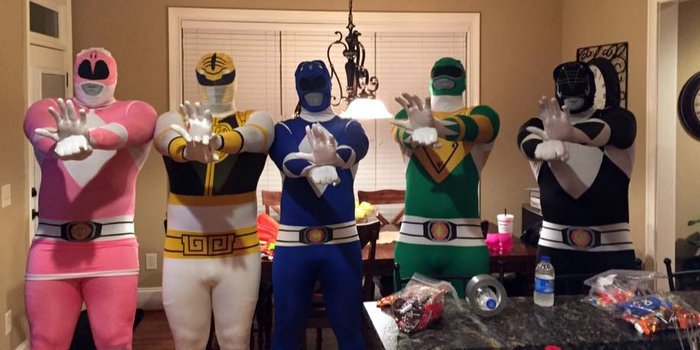 CLEMSON – The Clemson football team has the Oculus, a wise mentor and the Power Rangers protecting Death Valley.

Leading the Tigers' version of the 90’s fictional television series is sophomore defensive lineman Christian Wilkins, who started the group last year with his fellow linemen.

The Oculus serves as the command center for Wilkins and his teammates, while defensive tackles coach Dan Brooks plays the role of Zordon – the ancient, battle-tested mentor – and while they’ve been playing the role of Power Rangers for the last two years, their first public appearance was Halloween night.

“He (head coach Dabo Swinney) was really surprised (when the Power Rangers showed up at his house). He was thrilled,” Wilkins said. “We went to Coach (Dan) Brooks' and Coach V's (Brent Venables) houses. They loved it. They just knew we were having fun and having a good time. Coach Brooks is actually Zordon. If you guys ever notice, it's destiny, because the Oculus now looks like the command center. Every morning Coach Brooks texts us when there's an early meeting and I'm like, 'Affirmative, Zordon. On my way to the command center.' That's always my reply.”

Wilkins was the founder of the Power Rangers, thus assigning specific roles to each defensive lineman. The 6-6, 342-pound Dexter Lawrence, of course, wears pink.

“I held the power of the white tiger. I'm the white ranger. Carlos is the Mastadon (the black ranger),” Wilkins said. “We put big Dex in pink. He looks good in pink. There's a lot of material and a lot of pink. He embraced it. It's all love. Big Cle (Clelin Ferrell) is the green ranger and Jabril (Robinson), with his dreads hanging out of the back of the helmet, is the blue ranger.”

Their super powers? Wilkins said they have the same characteristics as any super hero.

“We're tough. We never give up. We fight the forces of evil,” he said.

Every time the five put on their pads and the iconic Tiger Paw helmet, they morph into another dimension, determined to rid Death Valley of evil and gridiron opponents.

“I'm a little upset because the secret is out. I'm a Power Ranger. That's the first rule of a Power Ranger - I'm not a very good one I guess becuase you're not supposed to let anyone know your secret identity,” he said. “We're just all having fun. The d-line, we call ourselves the Power Rangers. We started that last year because I'm a chronic Power Rangers fan. I love the Power Rangers and I always did, so I brought it to the guys and they all loved the idea. Every day before practice, that's one of our handshakes - we all morph. We all morph and power up. When that helmet comes on, it's morphing time. It's time to power up. Every time I get a sack, that's always my sack celebration - I morph. It's something we kept from last year and every time a guy leaves he passes it on to the next Ranger.”

While Wilkins loves goofing around with his teammates, he’s never had more fun than last Saturday night in Doak Campbell Stadium.

“Both are pretty fun - just messing around with the guys and being Power Rangers, that's cool, but that hit, I didn't like the way he pushed Van (Smith) and he was kind of in the way, so I gave him a nice little shot,” he said. “He didn't really say anything after. He couldn't really say much, I guess.”

Wilkins does his signature Power Rangers celebration after a big play.

Power Rangers has been in Wilkins’ life since he was a child.

"I used to have it all back in the day. I had the PJs, the pillowcase, the cover, everything. I was really a big time Power Rangers fan," he said. "My brother actually makes fun of me till this day - when I was three or four years old he used to come home every day from school and I would be watching the movie every day. Like when he would leave he would put the movie in for me and he would come home from school and the movie would still be on. I broke the VCR several times. I remember one time I cried because the tape came out of the VCR. That was a real sad day for me. Like I thought it was over. I didn't know what I was going to do from there, but we got another tape and it was all good.”

He’ll also be the first in line when the new movie comes out.

"Oh yeah, March 24th, right? Yeah, I'm ready for the movie. I'll be the first one in the theater,” Wilkins said. “I'll have my popcorn ready. I'm going to watch. I hope they don't really mess with the originals too much because that might make me pretty upset if the story lines are all way off and everything. Hopefully, they get some of the original actors in it. That would be really cool to see them squeeze them in there."