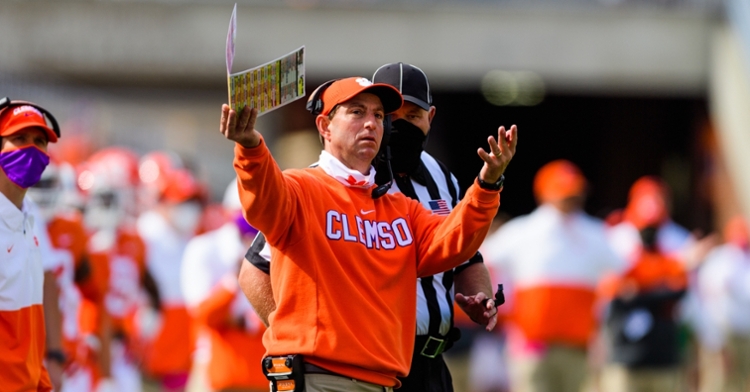 Swinney said he doesn't worry about what FSU has to say (ACC photo).

Clemson head coach Dabo Swinney continued to field questions Tuesday about last weekend’s postponed game against Florida State, but in one emphatic statement let everyone know he was ready to move past that game and focus on Pitt.

Speaking to the media during his weekly Tuesday press conference, the first question centered around the situation with the Seminoles and if he saw anything that should have led to Saturday’s postponement.

“You'll have to take that up with the league. I know what the rules are,” Swinney said. “I know what they were anyway. We met the standard to play. All of a sudden what was supposed to cancel a game changed last Saturday. You'll have to ask someone else other than me."

Swinney then reiterated that he trusts his people.

“They say what they said. We say what we say. We obviously don't agree,” Swinney said. “That's why it was clearly stated that the medical groups did not agree. I trust our medical team. I said it should be a forfeit because we met the standard to play. We even offered to play Sunday and Monday. Our medical group was 1,000-percent on board with us playing. I have no reason not to trust our people here. They have done an amazing job here."

He then had the mic drop moment of the press conference when he said he doesn’t really care, at this point, what Florida State says or thinks.

"We're not doctors. I am not trying to be a doctor. I just listen to the doctors,” he said. “I'm not worried about what they say down in Tallahassee, that's for sure. I've been in this league for 18 years and a head coach here for 12 years. They've had three head coaches in four years. I'm not going to worry about advice from Tallahassee.

"All we can do is follow the guidelines as we have done. I just coach the team. I don't come up with the guidelines. We just follow what has been in place like we have all year."

Swinney did cover this week's opponent, Pitt, as well on Tuesday.

“Pitt is a good team. They were ranked really high early in the season. When you watch them, you see why. They could easily be a 7-2, 8-1 team,” Swinney said. “They had two, one-point losses. They are first in tackles for loss and second in sacks. They play the game the way it should be played. We will have our hands full. Defensive line-wise, they are really good. They have two of the best ends we will see all year. They're in your face. You see a lot of tight coverage. They're built to stop the run and will always outnumber you. They're well-coached and understand their scheme. Offensively, everything starts with their quarterback. He is a veteran, he is savvy and understands what they are doing.

“They are an 11 (3 WR set)/10-personnel team (4 WRs). They make you have to defend the run, but they're throwing the ball down the field - deep posts, climb routes, everything. Their quarterback is a good runner. A lot of their biggest plays have come off of his runs. They're probably the fastest team we have played because of their tempo. We have to do a great job from a communications standpoint defensively. It's probably the deepest receiver group we have seen. They had a backup in last week and he had 15 catches."

Swinney said his team has a great attitude despite all that has happened.

“They're great. It's what we do. We had a great practice last night. They had a good day Sunday,” Swinney said. “We will have a great Tuesday practice today. They're just excited about playing football. It's easy to turn on the tape and have a lot of respect for the bunch that's coming in here. What happened last weekend was last weekend. Y'all keep asking questions (about FSU) and I don't have to answer them but I want to be accurate and truthful."

The first College Football Playoff rankings will be released Tuesday evening, but Swinney said he isn’t worried about where the Tigers will land.

“We have played eight games. We have played more games than most teams will play all year. I think that's their job ... to evaluate the whole season,” he said. “We have had one loss to the No. 2 team in the country in double overtime at their place. It doesn't matter now. They can put us where they want to put us. For us, we need to get to the ACC Championship game. To do that, we have to beat Pitt. If we can stay on course, we control our destiny. We have to earn our way there."