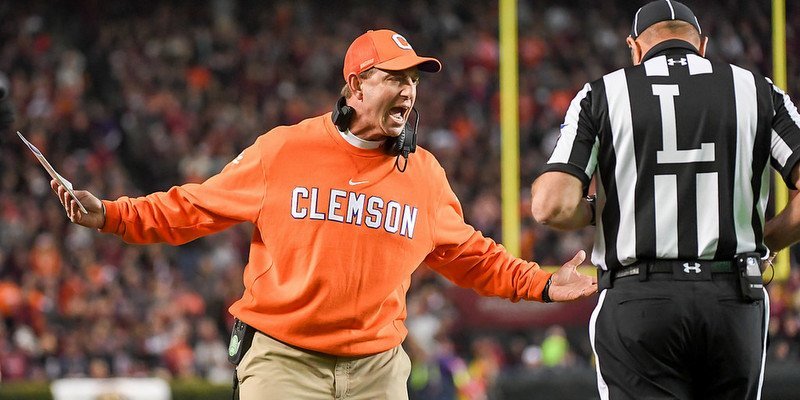 CLEMSON – While most of you spend the Thanksgiving holiday watching football and eating plenty of food with friends and family, members of the Clemson football will be practicing. At least in the first part of the day.

No. 2 Clemson takes on South Carolina Saturday in Death Valley, and with an undefeated record, a berth in the College Football Playoff, and bragging rights in the rivalry on the line, the Tigers can’t afford to take time off.

“I kind of like that it’s a little different this week because this is a season of its own and it’s kind of got its own preparation plan, if you will, because Wednesday is a little different,” head coach Dabo Swinney told TigerNet. “Sunday, Monday, Tuesday is the same, but the Wednesday is a little different because we’ve got more time. We’ve got a little more meeting time. Obviously, they have no school, so they get more rest. We always have Wednesday night family night but tonight is a sitdown true Thanksgiving dinner, and then we go earlier tomorrow. Practice is at 1:20. The prep is the same but the schedule is a little different, but I don’t think that’s a bad thing. Everybody has the same amount of time. I think it’s good to have a little time to reflect and give thanks, but these guys understand that you can disengage a little bit but you’ve got a task at hand, and you have to stay focused. Then, Friday is normal for us.”

Once the practice is over, the players who live nearby can go home for a little home cooking.

“We have a radius. We don’t like them to go very far,” Swinney said. “Most of our parents are here. Pretty much everybody is here, but we give them about an hour-and-a-half radius if they do want to shoot home. We don’t want guys driving a long way and things like that, but everybody has to be somewhere. Everybody has to declare - ‘I’m going to be with my family or this family or I’m coming to your house, coach’. It’s not as much to keep up with them as much as it is I don’t want anybody sitting in a dorm by themselves because nobody asked them come eat. We make sure everybody is accounted for. We really haven’t had any issues.”

As for the head coach, he’s headed to his brother Tracy’s house.

“I’m going to my brother’s. There may be some (players) over there; I don’t know,” he said. “They handle the Thanksgiving part and then I get my Christmas tree.”