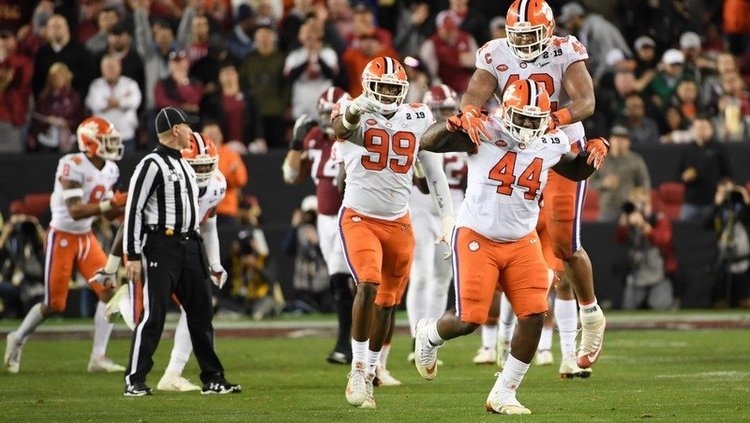 Defensive tackles coach Todd Bates is dealing with the loss of three of the best tackles to come through the Clemson program in Dexter Lawrence, Christian Wilkins, and Albert Huggins. All three players contributed to each of the last two National Championships, but the absence of those standouts has enabled Bates to have a teaching moment with his younger players.

“GONE. Grand Opportunity, New Experience. That is my acronym for this year,” Bates said recently. “That is what it is all for all these young guys. We miss those guys that are gone, but these new guys have the opportunity to turn potential into credentials and really get to work. They have been focused and I've been really looking forward to coaching this group.”

Returning veterans Nyles Pinckney and Jordan Williams missed spring practice due to injury, but Bates says both will be ready for the start of fall camp.

“I tell you what, man, it's been fun. It's been fun and it's been a challenge having the two guys who were projected as starters out for the spring,” he said. “But it was also a blessing in disguise. We got a lot of young guys work. A big part of recruiting is development and they got to develop. You don't develop without reps and they got an abundance of those in the spring.

“They are progressing well and right on track. It's good to have them back working and running and lifting and doing football drills. They have been leading.”

Bates said both players have learned to be leaders.

“The blessing in disguise for those guys with them not being able to physically do their reps and drills and practice in the spring was they had to take a step back and only be vocal,” Bates said. “Neither one of them is vocal naturally. So they got a chance to sit back and focus on the things that I am teaching. Because there comes a time, like the summer, when we can't be around as much as coaches, and you have to depend on your leadership to make sure that the drills are being done right.

“And they've done a great job with that. They really stepped up during the spring, even. I never saw Jordan or Nyles up here without one or two of those guys under their wing. Just showing them the way. Nyles has been there and played significant reps. Jordan played a little bit last year before he got hurt early on and then came back late. It was good to have those guys in the room teaching those guys.”

As for the pressure of replacing guys like Wilkins and Lawrence, Bates says that pressure doesn’t exist when players prepare the right way.