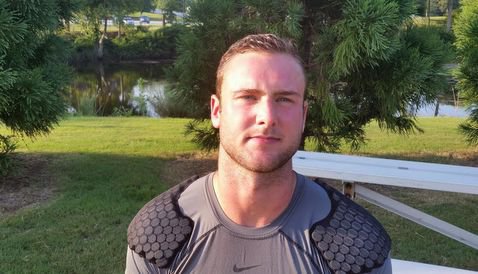 CLEMSON – Prior to the season opener against Georgia, senior tight end Sam Cooper

Sam Cooper
RS Sr. Tight End
#86 6-6, 250
Brentwood, TN
View Full Profile ran out onto the field at Sanford Stadium ready to start his final campaign as a Tiger with a bang.

A few minutes later, his night ended with a pop instead.

Cooper was scheduled to be a captain and start for the Tigers against the Bulldogs, but suffered a freak injury during pre-game warmups that sidelined him for Clemson’s first four games.

“One minute I am running around and then I go to plant off the left leg, and felt something pop but it didn't really feel like I had done anything serious,” Cooper told TigerNet this week. “It felt like I had gotten hit in the leg with a football, so I kind of went back and I was like, 'who is throwing a ball at my leg?' It turned out to be a snapped fibula. Football is a crazy game, but you have to get back on the field.”

Cooper said that while he could hear the cheers of the crowd as the game begin, team doctors were showing him a picture he didn’t want to see.

“They took me back in the locker room and x-rayed me and it showed up plain as day,” he said of the break. “That was a tough picture to look at.”

Cooper asked the doctors to get him back to the sideline so he could cheer on his teammates.

“It's a tough mindset to be in. You are geared up for your senior, it's your last go-round and then I had that position as a captain,” he said. “Then that is all taken away from you. But that's the great thing about football - it's not about you it's about the team. That was what was the hardest thing for me, was just watching and not being able to help out my teammates. We had great initial success and then down at the end I was just trying to motivate the guys and keep them up. I tried to do that as much as I could.”

Cooper has been more of a run-blocker rather than a receiving threat during his career – he has 17 receptions for 161 yards and three touchdowns in 752 snaps over 39 games (six starts) in his career. His 2013 season was cut short by injury – he tore his ACL in the spring and played in 12 games, but had just six receptions for 60 yards.

Last Saturday, he made his season debut against North Carolina and played 14 snaps in helping out the Clemson rushing attack.

“I am fortunate to be able to bring some skills to the table in the run game,” he said. “I am just looking forward to further developing that this week and continue on and get some momentum. It was great. It was emotional. I wasn't able to run too many routes or anything, but just to be able to be back out on the field was great. It's my last season, so I am trying to make the most of it.”

Cooper missed the game against Georgia and the one a few weeks later at Florida St., and while he’s excited to get the chance to play against Louisville this weekend he doesn’t care as much about the opponent as he does getting the win.

“I am so excited. It doesn't matter who it is, honestly. It's about building momentum,” Cooper said. “We go into each week thinking that each win will get us back on track, and now we have some momentum. We just want to continue that.”