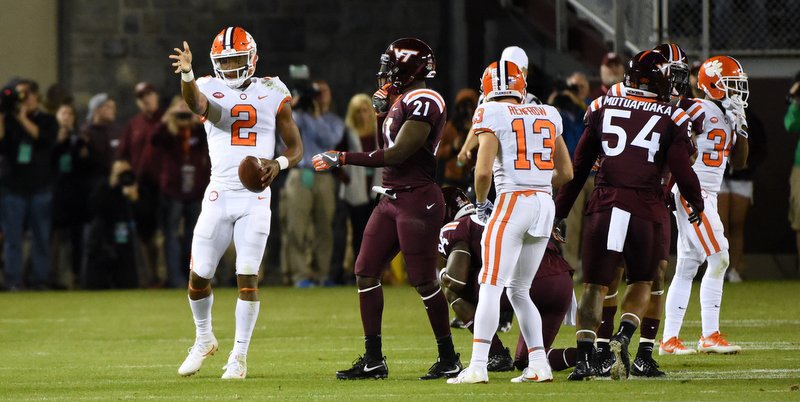 Kelly Bryant is a big reason the Tigers are 5-0

CLEMSON – Through five games, the Clemson offense has had flashes of brilliance, drives filled with toughness and grit and they’ve protected the football. But the passing game hasn’t gotten untracked, there have been plenty of mistakes and twice in the first five games has failed to garner more than 332 yards.

Co-offensive coordinator Tony Elliott knows that his young offense is still a work in progress, and what you see now isn’t what you will see by game ten or eleven or twelve. With that in mind, he’s preaching patience as the Tigers navigate a tough early schedule.

Clemson sits 5-0 and is ranked second nationally, but a large part of the team’s success sits with a defense that is ranked seventh nationally in total defense.

Elliott knows it will take time for this group to find its identity.

“No question. This is still a young group, and we're still building that chemistry every single day in practice and every single game that we play,” Elliott told TigerNet Monday. “The good news is that we've been challenged early in the season and we know what kind of character we have. But we are still young.”

“There are a lot of things that we can improve upon, and this will be a great film for us to coach off of,” he said. “Coming out of it, statistically, we are not where we are used to being. But we did what we needed to do to win the game. So there is a positive there. They went into a hostile environment and didn't turn the ball over.”

Elliott says the potential is there.

“We have the makings of being a very strong unit. But we still have to go back to work at each position. Especially at running back,” he said. “We have to play better without the ball. I think when we get the ball and get opportunities we do a good job, but we can be more physical without the ball and impact the game. Each coach is going to have things to coach off of. And that's what is encouraging, is that we've made it through a rough stretch here and we have two big weeks coming up here before we get to the open date, so we don't have the opportunity for any kind of a letdown.”

Many in the media and the fans expect the offense to click the way it did at the end of last season, but Elliott cautions that this is a group that is still learning to play together.

“I think the kids understand the standard. They understand the amount of preparation and what it takes to be successful,” he said. “We just have to keep driving that home every day in practice. The next game is the biggest game on the schedule. And then each unit, collectively, needs to get better. It's kind of like 2015, where we kind of built, built, built. We get compared a lot to last year, 2016, but that was an offense that had two years of chemistry and continuity together. Where this is a unit is just now stepping onto the scene and each game we are going to get better.”