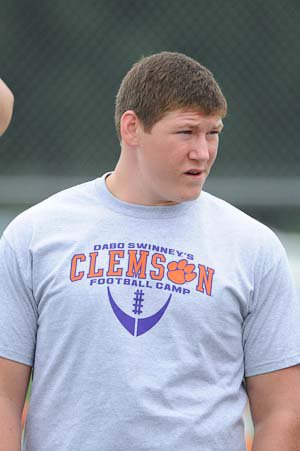 The Clemson Tigers have their first offensive line commitment for the 2013 recruiting cycle, and he’s a real Maverick. 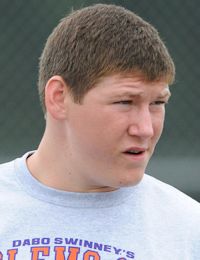 Maverick Morris, a 6-5, 290-pounder out of Douglas (Ga.) Coffee County received a verbal offer from the Clemson coaching staff after working out at Dabo Swinney

His head coach at Coffee County, Robby Pruitt, explained to TigerNet why Morris was an under-the-radar prospect until the Clemson camp.

“He has grown a lot since last year,” Pruitt said. “I just took this job in February, and in looking at the film from last season, he is just a lot bigger and better now than he was last season. He is still growing, and really should be just a rising junior because he is only 16. He will get bigger and better this year.”

Morris told TigerNet that it was actually offensive coordinator Chad Morris who made the offer, one he didn’t know if he heard correctly.

“Coach Morris called me over at the camp, and he told me they were offering,” Morris said. “He said that Clemson really wanted me. It was my first offer, so I wasn’t sure how the whole thing worked. I asked him, ‘Are you offering me for real?’ And he said that yeah, they were. I didn’t know what to think.”

Morris said he attended Clemson’s home game against Troy last September, and has been a huge fan since that game. As a result, he only wanted to talk to his parents before accepting.

“I pretty much knew that I wanted to go there,” he said. “My parents told me that it didn’t matter where I went, that it was my choice. But I still wanted to come home and talk to them before I committed.”

His parents gave their blessing, and he called the Clemson coaches early Monday afternoon.

“We called coach [Robbie] Caldwell and coach [Danny] Pearman and talked to them,” he said. “Coach Caldwell told me that coach Swinney was in a meeting, and that they would send me his number and I could call him later. I called him, and he said he was excited and that they were ready to get me up there.”

Morris said he plays left tackle at his school, but can play either side of the line, something the Clemson coaches liked.

“Coach Morris said that I was the right kind of guy,” he said. “He said they needed me on the line.”

Pruitt said that FSU and other schools were beginning to show interest in Morris, and that he was supposed to camp at Florida St. next week.

“I am fully committed to Clemson,” Morris said. “I am not going to talk to any other schools or go to any other camps.”

Morris is Clemson's fourth verbal commitment out of the state of Georgia for 2013, after being shut out in the Peach State in 2012.