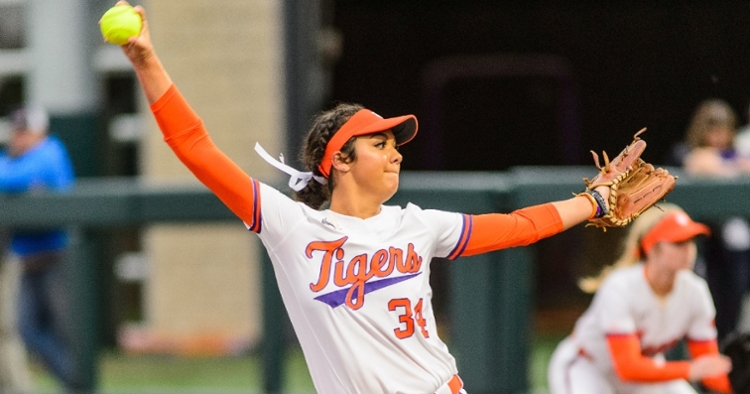 CLEMSON – Clemson pitcher Logan Caymol walked onto the concourse of the Tigers’ softball stadium Wednesday evening and was met by two young fans who wanted their picture taken with the star of the night. Caymol’s smile in each photo shined just as bright as her pitching performance just a half-hour earlier.

Caymol did not allow a single hit and struck out 11 batters as the Tigers defeated Western Carolina 8-0 in five innings in its first home win in program history Wednesday evening. Caymol, who was Rittman’s first commit back in November of 2017, was dazzling, facing just one batter over the minimum.

Caymol was committed to Tennessee before it was announced that Clemson was starting a softball program, and once word reached Athletic Director Dan Radakovich that Caymol was interested in the Tigers, he offered her a scholarship before announcing John Rittman as the head coach.

Caymol de-committed from Tennessee and committed to the Tigers on Homecoming weekend, just five days after Rittman was announced as the head coach. Rittman said watching his first commit throw a no-hitter was special.

“It was special. Logan has been here for an entire year. She worked hard last year,” Rittman said. “We didn't' play any games, so those kids sacrificed a little bit. Logan, with the adversity she's gone through in her life, to be where she is at right now is pretty amazing. It makes me really proud as a coach to see her perform the way she did tonight.”

Clemson lost the first game of the doubleheader but bounced back in game two thanks in large part to Caymol’s dominance.

“I was really proud of our team the way they battled back in the second game. Valerie Cagle's two-run homer early in the game took the monkey off our back a little bit,” Rittman said. “And Logan Caymol, what a performance tonight. A no-hitter and 11 strikeouts, just a dominating performance. That took a lot of pressure off of us. We are excited about that win in a great atmosphere tonight.”

Caymol said the night was a dream come true.

“It means more than anything, I remember being on campus this time last year and just watching the stadium grow from the ground up,” she said. “It's unbelievable that we've come this far and that we're at this place right now. I am just thankful for everything.”

Like a lot of pitchers, she was unaware that she was tossing a no-hitter.

“I didn't even know I had a no-hitter until after the game,” Caymol said. “But you can't have a no-hitter without amazing defense and an amazing catcher, so I am thankful for them. JoJo (Hyatt) played an amazing game. My rise ball was definitely working a lot better than it did last weekend. We worked on that pitch yesterday for a straight 45 minutes.”

Another freshman who shined for the Tigers was Cagle, whose two-run homer in the second sparked the offensive outburst.

“Our upperclassmen have been terrific leaders for this program. Both verbally and just by showing them how to do the ropes every day,” Rittman said. “So we are very blessed to have the upperclassmen that we have and the leadership that we have in. But Valerie is a special athlete. She throws the ball really well in the circle and she's only going to get better. She's coming off an injury so she's just now starting to get her endurance and she's going to be one heck of a pitcher for us.

“But she also plays centerfield for us and as you saw tonight she is one heck of a hitter as well. Just a very talented athlete and we are looking for big things from Valerie. She is one of those players that is a 5-tool player. She can pitch in the circle and be a dominating pitcher. But she is young and she has a lot of growing to do so the future is very bright for her in our program.”