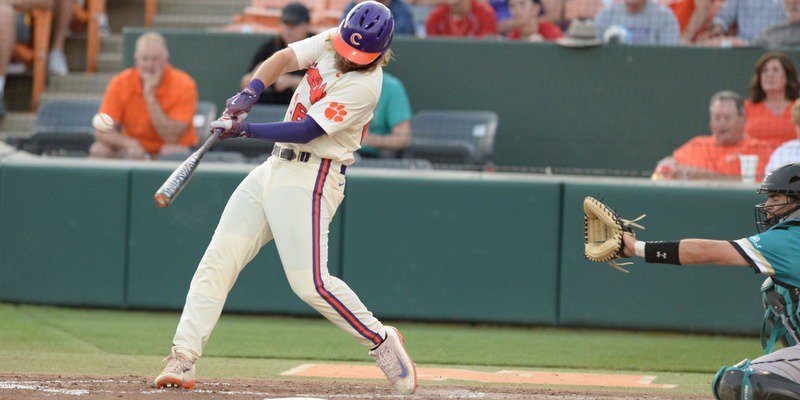 Rohlman also homered for the Tigers (Photo by David Grooms)

CLEMSON – Clemson and Seth Beer both needed this one.

Beer’s grand slam in the bottom of the eighth broke a month-long homerless drought and the Tigers broke a three-game losing streak with an 11-8 comeback victory over Coastal Carolina Tuesday night at Doug Kingsmore Stadium.

Clemson blew a 7-1 lead and trailed 8-7 heading into the bottom of the eighth, but Beer’s majestic homer to right provided the winning margin for a team desperately in need of a big hit from its best player. The win improves Clemson to 38-15, matching last season’s win total of the regular season. Coastal Carolina falls to 34-18-1.

Clemson ends the regular season with a three-game series at N.C. State that starts Thursday and runs through Saturday. The ACC Tournament starts next Tuesday in Louisville.

Clemson was undefeated in mid-week games and head coach Monte Lee said the last win at home will provide a good boost heading to Raleigh.

"We did not lose a mid-week game all year. We’ve had a lot of ups and we’ve had some downs, but one thing we have been is we’ve been consistent in the middle of the week," he said. "It’s good to close out the regular season here at home with a win against a great club. We look forward to going to Raleigh tomorrow."

"What a great game? Obviously, it was tough in a lot of ways there, but we really swung the bats well for the first five innings of the ballgame," head coach Monte Lee said. "We were really good offensively. We scored in four out of the first five innings. Defensively, we played a good ballgame. We only had one walk, one hit by pitch and one stolen base, so only three free 90s given up for us. The bottom line is in the eighth inning when we desperately needed to put together some good at-bats, we did."

Davidson got the scoring for the Tigers in the bottom of the first, blasting a leadoff homer into the Chapman Grandstands in left for his 10th homer of the season and a 1-0 lead. Beer and Chase Pinder singled, and Beer scored on a double by Weston Jackson to make it 2-0.

Clemson added to the lead in the bottom of the second. Grayson Byrd singled with one out, and after Rohlman was hit by a pitch Beer singled to left field, scoring Byrd for a 3-0 lead.

A double and two grounders got the Chants on the board in the top of the fourth, but Tigers began to play a little long ball in the bottom of the frame. Davidson drew a two-out walk, and Rohlman launched a two-run homer onto the top of the batting cages in right field. It was Rohlman’s sixth round-tripper of the season.

Pinder singled to short in the sixth, and one out later Weston Jackson launched a two-run homer to left that made it 7-1. It was Jackson’s fifth homer of the season.

Clemson starter Tyler Jackson ran into trouble in the sixth. A double, a single and a three-run homer by Kevin Woodall, Jr., made it 7-4 and ended Jackson’s night. The homer was Woodall’s 18th of the season. Jackson pitched five innings (plus three batters), giving up seven hits, four runs (all earned) with no walks and one strikeout. Three of the seven hits he gave up were extra base hits.

He was replaced by reliever Jacob Hennessy – his first action since the UNC series a few weeks ago – and Wood Myers greeted him with a long homer to right that made it 7-5. The homer was Wood’s sixth of the season.

The Chants pulled even closer in the seventh when Billy Cooke hit his 10th homer of the season over the wall in left, making it 7-6. The Tigers moved a runner over to third in the bottom of the inning, but Jackson was picked off at third base to end the frame.

The Chants pummeled the Clemson bullpen to take the lead in the eighth. Myers and Kieton Rivers singled with one out off of reliever Patrick Andrews, who was quickly replaced by lefty reliever Alex Schnell. Schnell was greeted by Seth Lancaster, whose double into right-center scored both runners for an 8-7 lead.

Ryley Gilliam replaced Schnell and got the final two outs, giving his offense a chance to retake the lead.

They took advantage of that chance in a big way. Robert Jolly walked to lead off the inning, and Byrd reached on a throwing error. Davidson sacrificed both runners into scoring position, and the Chants decided to walk Rohlman to load the bases for Beer.

Beer worked the count to 2-2 on reliever Jason Bilous, and he parked a moon shot over the wall in right-center for a grand slam and an 11-8 Clemson lead. The homer was his 13th of the season and his first since April 17th.

"It came down to a two-strike count and Seth Beer hit one out of here and did what great players do," Lee said. "I’m so happy for Seth, who it’s been quite a while since he’s hit one. It really was the difference make for us. It gave us our big inning and a four-spot in the eighth. How about Ryley Gilliam? He did an unbelievable job in the ninth inning."

Gilliam pitched the final 1 2/3 innings to pick up the win, improving to 3-1 on the season.